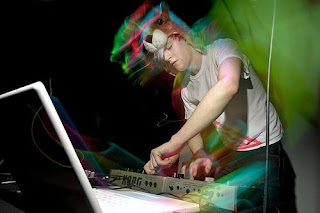 From Casio Kids who we recently posted about, to another new kid - from Scotland. Unicorn Kid is Oli Sabin. He’s seventeen years old. He has a penchant for toy animal headwear. He makes the kind of music that would violently force any self-respecting, serious music fan over the age of about sixteen to slash his or her wrists. For such a person such self harm would be infinitely more preferable than to listen to the speed addled eight bit bleepy euro chiptune he makes. Okay, we are some distance from our teenage years we can’t deny that, but who said that we had any self-respect or indeed were even serious ? Sometimes we just want to pretend we can jump as high as Super Mario and Unicorn Kid provides the soundtrack to do this.
The electro game wave sound of Unicorn Kid is the sound of a console taking some pills and frugging with a sequencer once used by Basshunter. We’ve had wonky pop, now this is wonky dance. Yes there are sneaky elements of trance and hardcore in what Unicorn Kid does, but his sound is, as Mr Rascal would say, much more bonkers than that. It is utterly stupid, utterly ridiculous, and in many ways utterly horrendous, but there’s something there, something quite bizarre, that makes us really like it. For at least five minutes anyway.
It seems that we’re not the only old kids on the block that have a guilty crush on this insistent gate crashing sound. For Unicorn Kid was recently asked to remix the Pet Shop Boys Did You See Me Coming at the bands request. With teenage bravado, Oli showed no reverence for the synth pop gods, stripping the song back to just the vocal and replacing it with a pac man zapping groove. That's confidence for you. He’s also just released his new single Wee Monsters. Listen and be enjoyably scared. This could be the future of music.
For regular readers, or anyone out of their teens, in fact anyone who prefers our normal coverage of cool underground pop, indie guitar bands, or sensitive new folk types, we apologise for possibly offending with this article, but we refuse to have singular vision in our music tastes. Ears wide open. Always. Normal service will however soon be resumed - otherwise the music police will be out to arrest us.
Posted by Breaking More Waves Blog at 00:01