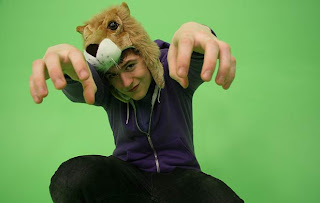 Unicorn Kid is Oli Sabin. At eighteen years old he has only just reached the age where he can legally enter a club that might play his music, which is an insane blend of pumping pulsing eight bit chip tune that brings to the ears delirious fanfares last heard on your Nintendo DS. We first blogged about him in August here. His bleepy arpeggiation is the kind of music that should you be considering jumping off a cliff will either push you over the edge or make you turn round and run wild to the local youth club rave, frothing, babbling and incoherent - but with a massive smile on your face.
The Scottish wonder from Leith has been through a variety of musical phases and arrived at the dance party a couple of years back. He is now a genuine internet phenomenon with over one million hits on his Myspace page. His music sits, or should we say bounces in the fourteen to nineteen year old demographic, his gigs not fuelled by alcohol but sheer natural youthful adrenalin.
Unicorn Kid has talked about manoeuvring his casiomental sound to a more commercial place and there are even rumours of guest vocalists. Jake Shears of the Scissor Sisters is known to be a fan. With an appearance at next years South by South West booked and an album tentatively scheduled for release next autumn, Unicorn Kid is riding on a starship.
To the uneducated ears of an over twenty five year old or a solemn indie rock purist, the sounds of Unicorn Kid will just be considered bad music, but for his growing army of fans his electronic urgency is simply something that makes you happy. Enjoy it whilst it lasts because Oli has already intimated that he doesn’t intend to be doing this for the rest of his life and when the fun is over wants to go to college to study his other passion of art.
We suspect that in 2010 lion hats are going to be one of the must have fashion items. Roar to the Unicorn Kid.
Posted by Breaking More Waves Blog at 00:01

Email ThisBlogThis!Share to TwitterShare to FacebookShare to Pinterest
Labels: Ones To Watch 2010, Unicorn Kid