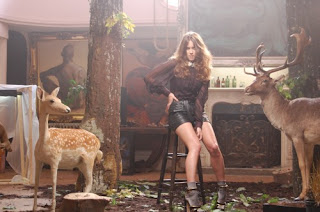 Here are some facts you may not know about Sunday Girl:
1. Her mother used to work in a spit and sawdust pole dancing club in Vauxhall, London and danced for fifty pence a go. Punters threw the money into a fire bucket by the door.
2. Sunday Girl met Little Boots last year at Stansted airport whilst waiting for an Easy Jet flight to Kos and told her that she was a ‘sperm bank for pigs’.
3. Her father used to be Assistant Head Gardner at Buckingham Palace but had to resign after allegedly growing a small patch of marijuana in a window box.
4. She once got a job as a local government pensions officer but quit after two days because the office she worked in “Smelt of 40 year old men, stale farts and prawn cocktail crisps.”
We post these unknown facts because almost everything that both professional and amateur writers know about Sunday Girl has been said. Yeasayer made the point recently in an interview with The Guardian. “That’s the problem with most journalism today. It’s just lazy. And blogs start quoting each other and there’s a cycle....” They have a point, but if there’s only so much information known about an artist and nothing else is being offered, there’s only so much a writer can report. Besides, not every reader reads every blog. Something written here will be new to someone. The four points above will be new to everyone. So cut and paste away if you want dear fellow blogger, but be careful, because all of the above are lies. Mind you that never stopped The Sun or The Daily Mail letting the facts get in the way of a good story. Allegedly.
So just in case you haven’t yet heard of Sunday Girl, here are some (often repeated) truths.
Sunday Girl is actually one Jade Williams. She is not to be confused with the American metal band of the same name. She ticks a number of boxes in the Breaking More Waves top pop chart, namely by her use of squiggly squelchy sexy synths, girlish vocals (well she is a girl, what do you expect, she’s hardly going to sound like Nick Cave) and a sort of girl next door simplicity that makes her easy to like. Her debut half-decent single Four Floors (video below) bore a slight resemblance to Ellie Goulding without the acoustic guitars. She used to work in a pet shop on a Sunday - hence the name, and has her own blog (here) where she spends a worrying amount of time posting pictures of fluffy animals and pets, rather like a ten year old girl. She’s even threatening to entertain us with the obligatory You Tube cover version, recorded in a pet shop. That will make her a Pet Shop Girl then; Neil Tennant and Chris Lowe you have been warned.
Now here comes the interesting part.
For those of a certain age the songs Gloria and Self Control will bring a wry smile with memories of big hair, shoulder pads and bad dancing at the discotheque - they are songs that perfectly fit the guilty pleasure concept. Sunday Girl has grabbed one of these songs and brought it high kicking and screaming into this decade, vaulting the name of Laura Branigan back into consciousness without immediately losing all credibility. For that we salute her and watch with interest as she develops further. The song streams below, together with a remix by Fenech-Soler and is released on the 26th July.