Going To Gigs On Your Own 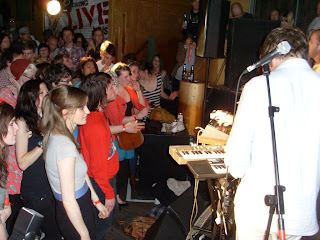 Wouldn’t it be so much better if everyone was forced to go to gigs on their own? One hundred or one thousand strangers in a room?
Let’s face it one of the biggest problems at shows is people knowing one another, or even worse just getting to know each other. Drunken, loud-mouthed idiots shouting throughout a bands performance or lusty couples chewing each others faces off like they haven't had a meal in weeks can be pretty distracting and verge on annoying. Incessant talking, particularly at quieter folk / acoustic gigs is never justified. We wrote about it previously here and here. Yet if we all went to gigs on our own these behaviours would largely cease to exist in concert halls.
The venue full of strangers scenario will never happen because it’s inherent in most peoples nature to act socially, be it for reasons of self-interest or the common good. From this social motivation there comes a stigma to being seen in such gatherings on your own - a category that gigs certainly fall into. Yet at any gig there will nearly always be someone in solo attendance. There may be a stigma, but when these individuals walk into the venue, they certainly won’t be laughed at, mocked and made to stand in the corner with a spotlight on them. They’ll just be another ordinary punter.
There are many reasons why people go to gigs on their own:
* Their friends just aren’t into the same music or into live music as much as the individual concerned, or have never heard of the band.
* Associates not being able to afford the gig.
* Lack of babysitter for those who have families.
* Friends not wanting to put in the effort, particularly mid-week.
* The individual happens to be in another town, away from home, maybe due to work, and sees that a band they like are playing that town - why miss the opportunity?
* Sometimes, people just want to do things on their own - some are more comfortable and confident in their own skin than others.
The idea of standing in a room full of people watching bands / artists play may fill some with dread, but if you’ve got the balls, there are advantages to solo gig going:
* You can selfishly go where you want, stand where you want, dance when you want.
* There’s no chance of having to put up with friends / partner complaining they are bored / tired / ill/ talking through the music.
* If you’re not enjoying it you can leave without offending other group members / friends.
* You may get to talk / meet new people that you wouldn’t have even noticed if you are in a group.
The biggest disadvantage for the solo gig goer is filling the space between sets. It takes a confident individual to be able to stand in a room full of people by themselves and just do nothing. So here the gig goer needs some tactics to fill time; Buy a drink (but be careful, there's a danger of drinking quicker on your own and a horrendously drunk soloist is worse than a drunk group - people will start to take a step away from you), go to the toilet, save up your text messages from the day and answer them all then, wander round the venue and see if you can find anything of interest, strike up a conversation with a stranger but accept the risk of rejection / disinterest.
Going to a gig on your own is a social fear. You may feel a bit awkward, but if you really want to go, and can’t find anyone to go with, what is the worst thing that can happen ? Very little actually. Just go for it. You might even enjoy yourself.
Posted by Breaking More Waves Blog at 00:01

Yeah, spot on. I used to go to gigs myself fairly often, but these days when my opportunities to get out are more limited, I like to make it more of a social thing. Thankfully I can usually persuade someone to go with me...

Before posting this article I asked around (on the web and in 'real life') who had gone to gigs on their own. I'm amazed how many actually do and have. Now I can add you to the list The Daily Growl ! Excellent.

As you say 'thankfully' I can usually persuade someone to go with me I take it that you prefer going with someone?

Robin - these are my favourite blogs you do. Much as I like (most) of the music you post about, its these discussion pieces about music that are the most fun.

I also have been to quite a few gigs on my own. Mainly because my friends and girlfriend aren't into music as much as me and only want to see things they've heard of. I sometimes feel self concious but I'd still rather go and feel that than miss out.

I must say it can be much more fun alone and I too am sick of people who inanely chat through gigs. At Glasto I went to see Chapel Club and a gang of young uns pushed to the front, fair enough I thought ,must be big fans but then they proceeded to talk loudly right throughout the set. I mean why get to the front to do that ? Grrr

Hey guys. Thanks for the comments. Something up with blogger at the moment (I'm getting error messages) which seems to mean that some comments are showing up whilst others aren't.

Seems like there's a whole host of music fans who go to gigs on their own. The common thread seems to be "I want to see this band, sod it, if no one else wants to go, I'll go on my own." That (imo) my friends, is a true dedicated live music fan....

I go to a lot of gigs alone, due to friends having different music tastes, and love being able to stand where I want, arrive when I want, do what I want.

Some good friends I've met through random gigs in strange parts of the country, and often I prefer going to gigs on my own to with groups of people - let's be honest, it's not like you can hear what your friends are saying most of the time anyway!!

Great post about this - hopefully more people will start being more adventurous and branching out on their own.

When I first went to gigs it was always with friends, but as I've got older my friends have lost interest in live music or only want to see the same bands we saw 10 years ago they think that 'current music is not as good as when we were at uni'!

I don't think like that so I tend to end up going to see bands on my own quite a bit. Luckily my town (Oxford) isn't that big so I've got to know other gig going regulars at venues and often there will be someone for me to say hi to and have a quick chat with in between bands.

At first I was unsure about going on my own, but now its almost a habit and I enjoy it.

My first gig was when I was 18 and it was a Killers gig in Birmingham. I went with some friends and quite enjoyed it - though I did end up getting pushed out the mosh pit. I didn't seem to go to any other gigs until I decided to go to see Los Campesinos...in Manchester. No-one would go with me so I ended up driving from the West Midlands and watching them anyway. I then saw Johnny Foreigner on my own (though a friend DID pull out) and saw Los Camp again.

I did enjoy it - because I got to enjoy the band on my own and stood where I wanted. There's always a bit of nervousness as I'm quite shy in general but I'm glad I did. Haven't actually met anyone random apart from one person I spoke about a T-Shirt with...but early days yet.

I'd go on my own again - mainly because no other bugger I know likes what I like.

Never been to a gig on my own - too scared to - so end up missing loads of bands I want to see - but reading these comments is making me think I might just go do it :)

I love going to gigs on my own, and it's definitely because sometimes you like to experience things on your own, without others shouting their opinions lazily into your ear. I remember going to see Ryan Adams on my own, an artist who is incredibly personal to me and I have rarely shared with anyone else, so going on my own was essential.

I go to gigs on my own a lot - I'm in my second year in uni here in England and am yet to find enough people with similar music interests.. But even when I'm not on my own, when the band starts playing I tend to wander away, I just like it when the music is everything that is happening at the moment.

And you are completely correct about filling the space between sets. Perhaps it's even worse for straight edge people like me, the temptation to get a drink is stronger than usual. One of the techniques I use to cope with this is writing my review on the phone while waiting for the next band.

I have also noticed that I am often late for the first band that's playing because I don't to hang around on my own for too long, which is a pity.