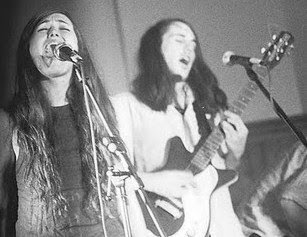 Go Outside by Cults is one of our favourite songs of the year. Full stop.
Now we have more. A new song called Oh My God that the band are giving away. And guess what ? It’s as nursery rhyme cute and fantastic as Go Outside. The New York band formed when Brian Oblivion met Madeline Follin whilst he was tour managing her brothers band The Willowz. His reason for managing was “because I wanted a free ride out from the east coast.” Whilst doing so he’d made it clear to Madeline’s brother that he was “totally gonna hook up with your sister.” Now he has, and we’re very glad, because we are feeling very weak at the knees about Cults right now. They’re a band that create something that has a complete pop ideal and yet also sound resolutely garage and underground at the same time. It probably explains why a certain UK chart topping pop star is rumoured to be trying to sign Cults to her newly formed record label.
When Madeline sings “I can run away anytime,” we’re hoping that she doesn’t and stays around for quite a bit yet. Here’s Oh My God by Cults to download. It certainly isn't a Kaiser Chiefs cover version.
Cults - Oh My God by Breaking More Waves
Posted by Breaking More Waves Blog at 00:01

Email ThisBlogThis!Share to TwitterShare to FacebookShare to Pinterest
Labels: Cults

Thats not cults that a dj mix

Thanks anon. Not sure what happened there. The player seems to have mutated itself.

Should be ok now - Cults are playing.