Whatever Happened To The Modern ? 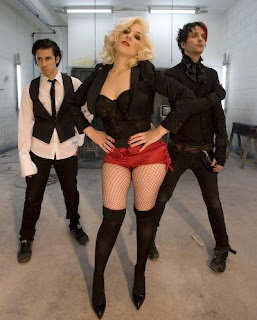 Back in 2005/6, as the word indie was being demolished forever by bands such as Razorlight and The Kaiser Chiefs, the initial battering by Britpop in the 90’s not quite being enough, forward thinking individuals were falling out with much of the music that was to be defined as landfill indie and instead finding satisfaction in other genres. The word synthesiser was, at the time, almost a dirty word. Synth-pop was seen as lacking the authenticity to endear to mass audience. So when a band like The Modern arrived with their debut release Jane Falls Down in 2005 they seemed completely out of place. Lead singer Emma Cooke brought a vamped-up Marilyn Monroe meets Madonna glamour girl goth sexiness, whilst Nathan Cooper and the wonderfully named Chi-Tudor Hart thrust shame upon the skinny jeans copyists with their sharp attire, keyboards and citing their influences as the rainy streets of Berlin. It was a far cry from the turgid jangly mess that was dirtily invading the UK music scene - a monster that thought that a pint of cider in The Hawley Arms in Camden was the height of sophistication.
The chances of The Modern gaining success seemed very slim indeed, yet Jane Falls Down with its Human League big synth riff hooks sneaked into the UK singles chart at number 35. Maybe this is what Little Boots was listening to five years ago? It certainly stood out at the time, synthetic beauty bringing colour and imagination to a music scene that was turning ladishly denim blue, speckled with Strokes / Libertines / Enemy / Oasis football-fan vomit brown. Follow up single Industry looked like it could smash it. A wind of change was behind The Modern.
Then it all went very wrong. Industry sold a spectacular amount of singles in its first week - enough to enter the charts at 13. Yet it never did. The song was banned due to alleged chart rigging. Hundreds of copies of the song had been purchased from different stores using the same credit card. The band later suggested that these purchases had been carried out by an over zealous family member. Even discounting these sales the song would still have charted in the top 30. It was however too late. The wind of change reversed direction again. The Modern were ridiculed by many of their fans and the music industry. By 2006 their record label had dropped them. The Pigeon Detectives Wait For Me album went to number 3 in the UK charts like a warty blow-job behind a bike-shed. Synthtopia went back into hiding.
The band faltered on, signing a deal with a small independent label and releasing the glossy Erasure / Gary Numan-lite Discotheque Francais under a new name The Matinee Club, in an attempt to distance themselves from the chart fixing scandal. By then however, the bands moment of opportunity had passed and by the time their album The Modern LP was released, very few were listening. If it had been 2009 The Modern LP would have been another part of the pop geography jigsaw. In 2006 you needed a map to find it.
What happened to The Modern after that is unclear. Their website and Myspace still exist but seem like abandoned graveyards, their forum a desolate and lonely place where a few lost individuals call for some news, the official videos for Jane Falls Down and Industry deleted from the internet. In 2009 the band surfaced to play a support slot with eighties haircuts gone crazy band A Flock of Seagulls, but other than this The Modern had become a faded near-glory. If it had been 2009/10 things may have been different - certainly their electro-pop sound would have fitted perfectly with the times. Like many others before them and many others after, The Modern can be tagged a ‘nearly’ band.
Yet it seems they are not quite done yet. At Bedsitland, the synth-pop club at The Lexington in London, a band called The Modern are due to take to the stage on July 10th. We’re not even sure if it is the same group, but if it is, and you’re in London, it may be your last opportunity to see one of the great ‘nearly made it’ acts of the last few years.
Posted by Breaking More Waves Blog at 00:01

Email ThisBlogThis!Share to TwitterShare to FacebookShare to Pinterest
Labels: The Modern

Hey, just found this blog today and quite impressed with it.

Also found this entry and found it interested. The album they released and bought from iTunes I think a brilliant album (mainly because I do love a bit of 80s-like music) and have been wondering if they were going to do anything new at all.

I hope they do.

I don't think that 'The Modern' is them though - I followed a Facebook page for a band with that name on Facebook and it wasn't them...

The Modern gig listed for July has now been removed from The Lexington listings, so even if it was them, it doesn't seem to be happening now.

Their website is down because it was not renewed. "regristration has been SUSPENDED".

Hi - I've only just come across this and have no idea whether you'll even see my reply..... but - yes, BEDSITLAND is my night and The Modern (yes, those ones) played live a few times. The Lexington gig was moved to the Buffalo Bars. Unfortunately, that was the last gig......no idea if they'll ever surface again :o(

Good news though - Nathan had a new band and his debut album is released today. He also played live at my club on Friday night.

And to keep up with live synthpop (by an obsessed Modern fan), please join the Bedsitland page :o)
https://www.facebook.com/groups/bedsitland/

Thanks for your comment and yes since we posted this article we've found out all about Kid Kasio who has featured a number of times on the blog.

The first time was here

The Modern have reformed (just Emma and Chi it seems) and released an album in 2017 called Revenge - their new website (themodernband.com) doesn't give away much info as to what happens next.....