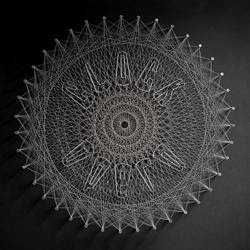 In our recent Camden Crawl preview we mentioned that chop pop specialists Clock Opera were due to release a new single - A Piece Of String - at the beginning of June. Before this, with every sharp popster from Hurts to Kylie Minogue to iamamiwhoami releasing ‘teasers’ of their new releases, Clock Opera do the same. As the new single is called A Piece Of String, this string art trailer is rather obviously suited. Watch the forty five second video below where veneer pins are stringed up to create the pattern / logo - the real thing must have taken considerably longer.