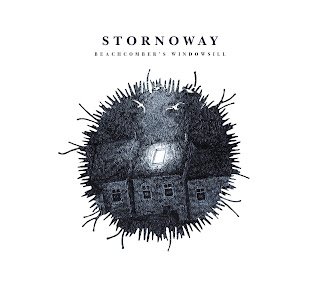 Just as last year certain journalists lambasted Mumford & Sons debut on the basis that they were posh boys who had discovered folk, Stornoway could also find themselves as sitting targets. Such class-conscious criticism is of course provocatively pathetic; yet if it does come, it is likely to go hand in hand with the fact that the music Stornoway make is unerringly 'nice'. Songs such as Fuel Up with its opening lines of “Curled up in the back of the car, nine years old you don’t know where you are,” share a sentimentality that verges on sickly sweet, reminiscent of the one hit wonder JCB Song by Nizlopi. Just the sort of thing hardened rock journalists like to get their teeth into.
Let’s however for a moment put the words 'niceness' and 'sweetness' aside and instead use words such as romantic, heartfelt, dreamy, delightful and charming. For this is the sound of Beachcomber’s Windowsill, an album packed to the brim with devastatingly wonderful songs. The kind of songs that make you want to embrace a stranger and realise that actually, the world is quite a glorious place if only we opened our eyes a little. From the so-good-it-just-had-to-be-re-released travel themed love song Zorbing to the bewitching gentleness of The End of the Movie, Beachcomber’s Windowsill is an album that comes cooing and petting to you, ready to nestle into your soul.
Although comparisons with Mumford & Sons are inevitable, due to the bands ability to pen a good tune from an acoustic folk tradition and gradual building buzz, Stornoway are camped in a different field. Whereas Mumford & Sons glory has come from elements of hoedown, musical up-swelling and climaxes, songs designed to be sung by the masses, Stornoway are more like a gentle whisper in bed, climbing in to sweet-talk the listener with soft admiration. It’s only on the more ebullient sounding Watching Birds where Duane Eddy guitars chug, drums rattle and lead singer Brian makes-out a little more aggressively that Stornoway display some characteristics of humping dirty vintage rock n roll. It’s the one moment that jars a little, but at least shows the band are also prepared to try other styles.
The core of Beachcomber’s Windowsill is engulfed in lyrical beauty and the songs to match. Turns of phrase like “The storm has broken, heavens open, so electrifying, I’m nearly flying, lost my heart between the sheets of lightening,” are passionately wonderful in their simplicity. Acoustic instrumentation is to the fore, with lead singer Brian Briggs producing clear, precise vocals hinting at the tones of Tim Booth from James. You can hear it on the pop melodies of I Saw You Blink, where the songs title is allegedly percussively transmitted via morse code using a guiro, to the sea shanty banjo beauty that is We Are the Battery Human - a deep thinking four part harmony led song about how our species was “was born to be free range.” One of the highlights is Boats and Trains a fluid mellow musical journey that sings of the fear of unrequited love. We dare you to play it and not offer a little sigh of affection.
In a digital age where every aspect of our life is heavily influenced by electronics and computers, it seems ironic that some of the best albums of this year are being created by young musicians following very traditional paths. I Speak Because I Can by Laura Marling was one example. Beachcomber's Windowsill by Stornoway is another. Quite simply an album of near perfect songs.
Posted by Breaking More Waves Blog at 00:01

A very lovely review. Can't wait to hear the album.

I have followed Stornoway live for a few years now. They are an incredible talent and I the album deserves to be huge.

I love the songs I heard so far - can't wait to hear more!