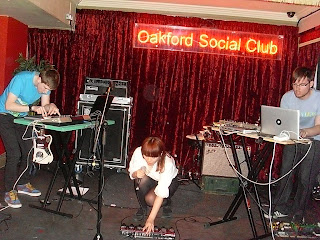 As a live experience visual stimulation can often be the downfall of laptop wielding bands, particularly in small venues. Unable to hide behind banks of hypnotic lighting or multi-media visuals, all that is often left is the spectacle of watching some vacant looking individuals twiddling knobs.

Nedry (pictured) overcome these problems with their secret weapon – their Japanese born singer Ayu. Like a small child she dances and skips around the stage with a complete lack of self-consciousness, clawing at the air like a cat. She is strangely compelling to watch. Her voice is a ghostly wail, reminiscent of a more spectral Bjork, echoing and looping through effects pedals. The two male members of Nedry also give it their all, heads and bodies bobbing in unity, wrestling with their technology - a synchronised downtempo-dub-step-glitch-rock-trip-hop groove machine. Nedry are a complex mix of experimental noises, beats and riffs that challenge the ears, and despite the computerised base from which much of their sound emanates it never feels anything less than organic and loose, jetting off in different directions at any given moment. Scattered is full of evil rampaging blasts of fuck-you-backwards guitar anger, whilst Apples & Pears is more graceful - a fusion of simpler soft guitar work, clipped beats and low-end frequencies. Innovative, progressive and visually engaging, Nedry defy the idea that geektronica doesn’t work without the camouflage of additional imagery or videos to distract.

Support band Worship are a little more familiar sounding - there’s a sense of new-seriousness about their Radiohead-esque songs. Like Nedry they are driven by laptop based instrumentation but this time with a more traditional guitar sound. Lead singer Tim has a brooding, soul-stirring vocal that floats over the Berkshire bands atmospheric music. Worship may not yet be fully formed – not every one of their songs being fully captivating, but they’re weightily polished. It probably explains why despite their infancy they were recently invited to play a live session on BBC Radio One, despite not having yet released a single. There’s a sense that Worship are a band who are still discovering themselves in terms of audience engagement in live performance; despite a chirpy hello and an announcement that this is their last show for a while, watching them feels invasive and voyeuristic. It’s almost as if they are in the recording studio and the audience have been invited to peep through the keyhole to preclude their shyness. There is no doubt however they are highly competent and have a good deal of substance in their music – the staggeringly good In Our Blood being a deft pulsing example. As we said before, file in the drawer marked ones to watch.