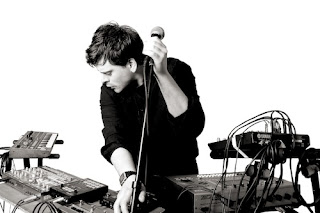 Described as “Newcastle’s very own one man electro-punk-pop-party,” which sounds like a pretty scary thing if you really think about it, Razmataz Lorry Excitement releases a new double A-sided single on the 3rd May through Fakedream Records. A Year Short on Surprises is a high energy piece of jittering synth mentalism with smooth falsetto vocals, the kind of resonating groove that’s going to make your body jolt and twitch in mad spasms like the final moment before orgasm. It’s a punch-the-air piece of dirty wall to wall electricity and we like it a lot.
The title of the track comes from a Guardian review of Razmataz Lorry Excitement at the Leeds Festival in 2008 where journalist Dave Simpson wrote “In a year short on surprises, the weekend’s most unlikely triumph belongs to a Geordie on the unsigned stage who calls himself Razmataz Lorry Excitement.”
The other track on the single is Trial and Errors. A little more laid back than A Year Short on Surprises it takes some hammering electro-piano sounds and bleepy flows to create an easily danceable piece of electronica, the kind of thing that could float easily over a summery field of sunshine clad ravers, it’s full of minimal mastery.
Razmataz Lorry Excitement is actually one Kev Dosdale. He has recently been on the road with Field Music, touring as an additional synth and guitar player for the band. He has also supported the likes of Klaxons, Shychild and Crystal Castles under his R.L.E name. Below you can find both tracks which are currently available for streaming and in the case of Trial and Errors free legal download. Crack the case.
Razmataz Lorry Excitement - A Year Short on Surprises by Fakedreams

Awesome track, just got a hard on and almost jizzed in my pants listening to that.

Any chance of it being downloadable (pretty please) like the other track.

Afraid not. Consent has been given to download Trials and Errors but only to stream A Year Short on Surprises. Please support the artist and buy the track when it is released.

Can't take any risks anymore with this Digital Economy Act dictatorial bullshit. I am looking forward to a scathing editorial on the politicians, who, whilst apparently trying to rebuild their reputations and "clean up politics" after expenses scandle, slip in a bill severely infringing civil liberties during the last few days of Parliament. I'm sure it's going to happen :)

You'll be able to grab the other track as a download nearer to the release date.

thanks for the kind words guys. should be giving away free podcast mix soon, keep eyes on http://www.myspace.com/razmatazlorryexcitement for details. (btw promo photograpgh by ian west http://www.ianwestphoto.com)