Hurts - Dragostea (The Making Of) 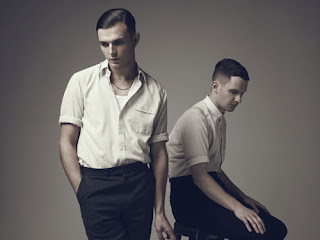 Hurts, Breaking More Waves Ones to Watch 2010 and BBC Sound of 2010 nominated group are dividing opinion. Fake, bland, up their own backsides hype-merchants with boy band-lite songs? Or artily cool teasers bringing the highbrow back to the face of pop music? Quality by the designer suit load or Primark styled landfill pop?

The bands ideology, presentation and character are being speedily deconstructed on the internet, and rightly so, because whatever you may think of their music, Hurts (or their record label) have chosen a minimalist (some would say pretentious) method of marketing and promoting their product. We could forget about the image the band present and simply argue that ‘it should be all about the music’, but as a pop band image is hugely important. Would Lady Ga Ga be quite as brilliant if she wore skinny jeans and a grubby polo shirt?

Ultimately there is no way no objective way to assess Hurts. Music, together with the imagery, politics and attitude that surround it can only be judged subjectively. To pretend any other way exists is a lie. There will be those for whom Hurts are the embodiment of all evil. There will be those who think that they are the greatest male pop duo since the Pet Shop Boys. Lines are being drawn. The battle commences.

On May 19th Hurts release their new single Better Than Love. A step away from their more grandiose emotional balladeering, Better Than Love is a better than average electronic pop blast. According to the Popjustice forum the song comes from Hurts previous larger multi-member incarnation Daggers. More upbeat than much of their other material, it isn’t their best song by far, but broadens their scope. As a teaser for the video for the single, Hurts have released this “Making of the video” teaser entitled Dragostea, which means Love in Romanian.