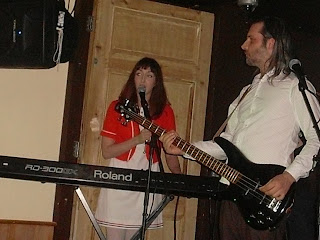 For those like us who thought that The Hall of Mirrors represented a soft focus dreamy French café pop collective – think again. From the blood red Spacemen 3 guttural guitar intro to the lead singers female reverb soaked vocal, this is a band that in a live form trade on big alternative rock sounds set to some sort of blurred psychedelic vision. It later transpires that tonight is not the standard Hall of Mirrors line-up, with members of The Confederate Dead – friends of the band, being enlisted to help replace missing players. This explains some of the explosive din coming from the dark strobe-frenzied stage.

The mission tonight appears to be to create some sort of mind-blowing transcendental noise – a velvety Brian Jonestown Massacre perhaps. Lead singer Jessica Spencer takes cover behind her keyboard, one red shoed foot bracing her against the wall. “I see spirits everywhere,” she wails, spreading her arms theatrically wide, her head thrown back, like a young Kate Bush about to climax in some sort of blissful sonic orgasm. Sometimes the vocal is almost lost in the uproar of funeral guitars and drums, but this gig seems to be less about songs and melody - more about dense and sometimes heavy atmospherics. In that respect it works well, the often ineffectual sound system at The Fat Fox coping admirably enough to leave the small audience feeling that their ears have received some kind of beautiful battering.
Posted by Breaking More Waves Blog at 00:01

Email ThisBlogThis!Share to TwitterShare to FacebookShare to Pinterest
Labels: The Hall Of Mirrors