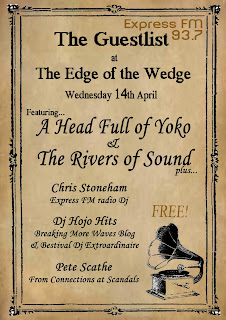 Outside of blogging, Breaking More Waves has its musical fingers in a variety of other pies that are filled with delicious sonic fillings. All of these pies are tasty goods, but they all allow us to remain impartial as a blogger - none of them are created for commercial gain. Maybe this is why the BBC called us a ‘tastemaker’ when they asked us to vote on their BBC Sound of List – they’ve sampled our fillings and found them rather flavoursome.

Next week two of these musical flavours join together as our local radio station Express FM present a live show from Portsmouth’s Edge of the Wedge, next door to the infamous Wedgewood Rooms music venue. Our small band of Twitter followers or larger band of regular readers may know that every other week we take a slot on the stations number 1 alternative and new music show The Guestlist. The slot involves us recommending a new band or song under our guise as blogger. Previous tracks we’ve played out include Ellie Goulding, Stornoway, Silver Columns, Mirrors, Dan Mangan, Cults, Run Toto Run, Let’s Buy Happiness and Nedry – a reasonably eclectic spectrum.

Besides our radio banter we also have occasionally acted as a DJ of sorts, under the name DJ Hojo Hits. This DJ act started as a weird, shambolic, comedy alter-ego, which was in tribute to an internet campaign to get 80’s synth pop star Howard Jones booked for the Bestival festival. The campaign at times verged on musical terrorism, but ultimately, after four years, has led to curator Rob da Bank crumbling under the pressure and Jones being booked to play this year. In celebration of this DJ Hojo Hits is also returning to play some tunes, just like he did two years ago. (See here) It’s going to be emotional.

On Wed 14th April we will be acting as both blogger and DJ, as we participate in The Guestlist show live from The Edge of the Wedge. The fun starts from around 7.30pm, with the show going live on air from 8 – 10pm and then continuing off air after. There will be two live bands, other DJ’s (including Southsea ‘legend’ Pete Scathe who has been running one of Portsmouth’s most popular indie / alternative nights for over a decade Connection at Scandals) and entry is completely free. You may even see the worlds most shockingly amateur DJ battle in all of history. We're going to be raising our game for that one.

So, if you fancy biting one of these pies, we’re baking for you now. Get down to The Edge of the Wedge, Wednesday 14th and April and meet the pieminister. You can also listen to the show live on the night using the internet by clicking here, although unfortunately there is no listen again facility.

It’s going to be tasty.

Well if I was nearby I would be turning up for a slice... but I'll try the link.
And don't forget a good crust is as important as the filing.

Yep, probably a little on the inconvenient to come all the way from Finland to attend :)

But everyone is welcome, even crusty types.

Sounds like fun - I'd come as well if a flight from Harrisonburg, Virginia didn't make it a little prohibitive :)

My chance to meet you and I'm busy that night as I'm seeing I Blame Cocco in London.

Not sure if I agree about blogs being impartial being a worthy thing, I like a good biased opinionated blog.

Nate - that's no excuse get that plane booked :)

Scryst - maybe another time. Yes I agree, blogs that are full of opinions are great - they stimulate the mind (even if you don't agree with everything they say) - When I write about impartiality I'm talking commercial impartiality. If a blog is tied in to commercial enterprises of its own there is a risk (although this risk is not absolute)that the articles it runs may be influenced by economic decisions and ultimately become nothing much more than a PR machine for its own products, which is fine if the products are good, but one of the things I value about blogs is true their true independence - they can be fair and not prejudiced in what they publish because they have no commercial factors to consider.

I see - in that case I agree with you to a point. I don't mind the blog becoming a PR blog if the music they put out is good.