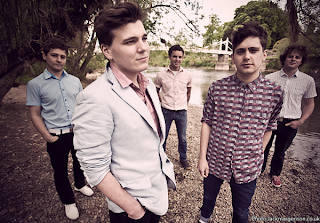 Hereford 5 piece Apples have been bobbing around for a while now, their debut single Reason 45 picking up attention last July with its summery harmonies and pretty pop aesthetic. It even managed to argue with indie protocol by placing alongside spiked Haircut 100 guitars the now neglected de rigueur instrument of the 80’s - a saxophone.
At the end of this month Apples are back with a new song - Theo. Another jaunty crispy fruit bowl full of very English pop chants and tropical rhythms it has a colourful irresistibility about it that can be filed under headings such as 'toe-tapping', 'agreeably hooky,' or for the bad pun fans out there 'golden delicious.' Apples certainly don't unleash any sort of hardcore punk noise. Their world is one of clean cut, distinctly sprightly songs. Fresh, youthful and playfully fun. They do a neat line in smart casual.
Also highly worthy of your attention is the B-Side. Back in the 80’s, before Paul Heaton formed The Beautiful South and then left to save the great British pub and Norman Cook left to become Beats International then Fatboy Slim, they were members of The Housemartins. The Housemartins had a number one single with an acapella cover version of Isley Jasper Isley’s Caravan Of Love. It alienated many of their original fans but brought them huge commercial success. Now Apples have covered the cover, and it's available for download below. It seems the band are big fans of barbershop singing, having also had a very good go at The Flying Pickets (here). They may not pick up many indie rock cred points - it's hardly Sonic Youth, but at least they are doing something different, something that they believe in. And that surely is credible on its own.
Grab them now, and keep the music doctor away. You can purchase the single, which comes as a bundle with a 7" and CD here.

Email ThisBlogThis!Share to TwitterShare to FacebookShare to Pinterest
Labels: Apples