James - The Night Before 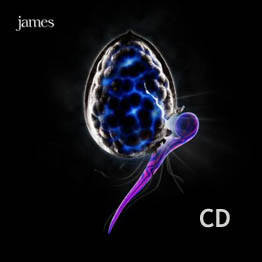 Formed in the early 80’s, Manchester band James achieved huge commercial success in the 90’s with songs such as Sit Down, Sound, Born of Frustration and She’s A Star. And although they split in 2001, the group reformed in 2007 to tour and release a new album Hey Ma. The Night Before is the first of two mini-albums the band plan to release in 2010, the second being titled The Morning After, currently expected in July. To record The Night Before the band worked virtually, recording and uploading their music to a ftp site, the whole thing being pulled together by producer Lee ’Muddy’ Baker. Once James have toured this month they intend to spend five days “to capture something spontaneous,” and play and record in a room together once more to create The Morning After.
With The Night Before the group rediscover the sound that put them at the peak of the sales charts in the 90’s. Songs such as Crazy with its chorus of “I’m not cra-a-azy, I’m just laughing at myself,” are top-notch trademark James tracks. Their music may not be particularly relevant now and is unlikely to see the band storming a new popularity, but these melodic songs, that sweep, soar and ebb in all the right places will please long-term fans immensely. No new tricks are present, but the argument is that if the magic was good, the wand is worth a further wave. At this stage in the game, most fans will be quite happy without any massive artistic progression as long as the songs are of quality.
A number of these tracks could quite easily find themselves cohesively sitting on the James album Seven, one of their biggest sellers. For example, Ten Below finds singer Tim Booth reminiscing on his younger years “I’m at the bottom of my bed, headphones on my head, John Peel show, feels ten below,” over a brooding, pummelling indie rock sound that seems designed for larger venues. Porcupine is also vintage James. Starting with a clicking electronic pulse, countryesque guitar underpins Booth's warm and soft voice before the song bursts out of its sleepiness with an arms aloft chorus halfway through. The only track that grates a little is Dr Hellier. Inspired by Booth’s hospitalisation for liver disease it takes a heavy handed approach lyrically comparing his body to Afghanistan and that his doctor said that “We can’t let the Taliban take over and breed.” This lyrical coarseness is a minor criticism though.
For those who loved James in the 90’s, there will be much on this record that will remind of times past and give a cheery rose tinted moment in the present. The only disappointment with The Night Before is that as a mini-album, it doesn’t last long enough.
Posted by Breaking More Waves Blog at 00:01

Email ThisBlogThis!Share to TwitterShare to FacebookShare to Pinterest
Labels: James

As someone whose need for the 90s is so great that this morning I listened to Carter USMS 30 something in it's entirety, this makes me kind of happy.