Why I Went All The Way To Estonia For A Cocktail 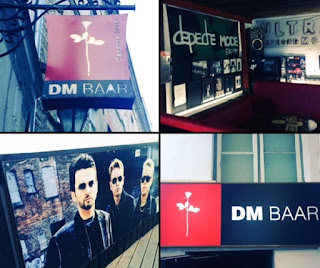 Last month I posted about how this blog had, at its best, become far more than just me bashing out a few words about music in the few spare minutes I have in the day. Breaking More Waves has become a vehicle for enabling some remarkable, emotional, beautiful and even comical journeys to take place in my life. Those journeys have been created through friendships that without this blog, almost certainly wouldn’t have formed. I’ve already written about sharing one such journey (on this post about singer Alice Jemima here) and today I’m writing about another one.

A few weeks ago on BBC 6 Music DJ Steve Lamacq asked listeners to text or email in the weird and wonderful rock ‘n’ roll pilgrimages they had been on. Of course there are the obvious ones such as Salford Lads’ Club for fans of The Smiths, a trip to Abbey Road in London for Beatles ones, Graceland in Memphis for Elvis lovers and one I have visited myself – Jim Morrison’s grave in Paris. However, there’s another one that probably doesn’t crop up on the list of ‘must visits’ for quite so many music obsessives, and that’s to Tallinn in Estonia. But last weekend I made that pilgrimage. To visit DM Barr. Yes, it’s a bar that is solely dedicated to the music of British dark electronic pop band Depeche Mode.

Why? I hear you ask. Here’s the explanation…..

It started on the 10th May 2011, when I wrote a piece about a new band called Curxes. I described their sound as “a mixture of the darkness of post Vince Clarke Depeche Mode, the industrial ice-cool of Propaganda, vocals reminiscent of a smoother Siouxsie Sioux all carpeted with fluidly uplifting pulses.” They were an exciting prospect because they really didn’t sound like any other new band around at the time and the lead singer had a thrilling powerhouse of a voice. Shortly after I wrote about the group that singer, Roberta, got in touch by email to thank me for the piece. Bands – that’s a tip for you, if you like what I write about you, a personal thank you can go a long way. In her email she suggested meeting up for a drink at some point, as we lived relatively locally to each other. A few days later we did just that and the slow beginnings of a friendship formed. It turned out that Roberta was indeed a big fan of Depeche Mode; my reference had been correct.

Like all good friendships, ours took some time to mature. By way of dead of night long drives to the middle of nowhere to chew the fat about our relationships with our partners through to many discussions about the internet, music and social politics, to gigs together (which of course included the mighty Depeche Mode as well as a mind-blowingly good show by the Pet Shop Boys) a bond began to form.

And during this time Curxes slowly released their musical output to the world, played some great gigs, some not so great ones and developed a small but appreciative fan base. It’s probably no surprise to find that I wrote about nearly everything Curxes released. Not because I was a friend, but because I was a genuine fan of their music – and wherever I could I helped them, giving them advice about how to get their work heard, constructive criticism of the songs, even driving them and their equipment to play in unlikely locations such as Leigh on Sea and Northampton as well as more obvious locations such as London and Brighton.

Push forward to the end of 2015 and Curxes announced their parting of ways. They had released a number of singles, a well-received album, an official remix for another bad spelling band of the rise (Chvrches) and had supported the likes of Wolf Alice, Friends, Karin Park and Polly Scattergood. It was not, as some thought, the end of Curxes entirely though, but a time for a pause, reconfiguration and reflection.

It was also around this time that I received a message from another music blogger Leigh from Just Music I Like. He was in Tallinn and was sitting in a bar dedicated to Depeche Mode.

“We have to go this,” I texted Roberta. “I’m taking you.” Why did I text that? Because life’s too short to say no to new experiences, new possibilities and have fun. Because sometimes it's good to do something just because you can - especially if it makes someone happy.

“You’re drunk,” she messaged back.

“I’m not and if you don’t believe me I’ll text you again in the morning.”

The next morning I texted again. Roberta believed me. Plans were made and as a result last weekend we flew to Estonia.

Tallinn is a beautiful place; I absolutely fell in love with its gorgeous churches and towering spires and medieval squares and clean cobbled streets and queer markets and stylish galleries and most importantly its people who were far more friendly and welcoming than my prejudices of Eastern European countries would have allowed for. But before sightseeing, we were on mission to visit one place and one place only.

The Depeche Mode Bar itself is located within the medieval walled part of the city up a narrow street just down from a nearby record store. Located in a dark cellar the place is full of Depeche Mode memorabilia, posters, Depeche Mode themed cocktails (yes, I admit I drank several – the excitement of actually being there got the better of me) and of course the band’s music, which is non-stop. First played from videos but then transferring to a DJ who on the night we were there found himself playing to a group of grown men dancing and singing in unadulterated joy to all the bangers from the leather clad synth goth boys from Basildon. It was fantastic. I’d been worried that after all the jokes about how we were flying all the way to Estonia just to visit a bar the whole thing would be an embarrassing let down. But it wasn’t – it was almost exactly as I had imagined it.

We left with huge smiles on our faces as we strolled back across Freedom Square to our hotel. Inside I was pretty pleased that I'd sent that slightly crazy text.


Thanks to music. Thanks to my blog. Thanks to Depeche Mode. But more crucially than that, thanks to friendship and the sometimes weirdly brilliant but very special moments it makes in our lives.

If you haven’t heard Curxes or Depeche Mode, then your musical map is incomplete. Take a listen to both below. Run From The Funeral is a track from Curxes' album Verxes and hasn't featured on this (or as far as I am aware) any other blog before. You can find and hear the album at this link here. Never Let Me Down is a big arm waving anthem that pretty much every Depeche Mode fan loves. You can find it pretty much everywhere, but particularly in Tallinn, Estonia or just below the Curxes track.

When she isn't being the mouth piece for Curxes, or expert vintage item seller, Roberta designs some amazing (and very funny) pop star greeting cards. If you're a fan of Depeche Mode then take a look at her work on this link here. Her full product range can be found using this link.


Curxes - Run From The Funeral