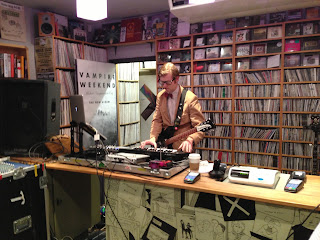 The groundswell of love for Public Service Broadcasting (J.Willgoose seen performing in Brighton’s superb Resident Records store above) in the UK has been rather wonderful to watch this year. The reason for it? To use a marketing term – unique selling point. We really can’t think of another group like them.
As somebody on You Tube recently commented “It's like wandering through a forest and finding paradise, but it's a small one that no one else save for a few people know about.” This is true, but paradise is growing. Their use of vocal samples that completely integrate with the music, their quintessential polite Englishness, their emotive and moving live shows that also make you dance and laugh, their ability to sound like a BBC Radio 4 documentary, a rock band and a pop group all at the same time, these are just some of the reasons why Public Service Broadcasting are becoming many UK music aficionados new favourite band.
Theme From Public Service Broadcasting is the new single, taken from the debut album Inform Educate Entertain and is released on 12th August, including on a rather snazzy pink vinyl. It’s probably the only song that you’ll hear all year with a 1958 speech from pioneering American news broadcaster Edward R. Murrow, some jerky cartoon rhythms that you can dance to but would never be heard in a nightclub and a banjo that doesn’t give any hint of Mumford & Sons. Really, what’s not to like about that combo?
Public Service Broadcasting - Theme From PSB
Posted by Breaking More Waves Blog at 08:30