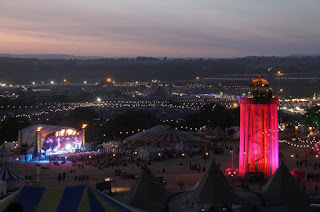 So far Breaking More Waves coverage of summer festivals for 2013 has centred around multi-venue indoor events, but as the weather gets (hopefully) warmer, it will be time to get the tents, sleeping bags, wellies and sun block out and head off to various fields in the British countryside.

We start with the daddy of them all; Glastonbury, or to give it its full title The Glastonbury Festival of Contemporary Performing Arts.

It’s the daddy for two very simple reasons. First it’s the most established festival in the UK, having developed from its 1970’s hippy roots to its more mainstream identity that it is now and secondly because of its sheer enormity. If you’ve never been before (newcomers make up approximately 30% of Glastonbury’s yearly population) be prepared to be blown away by its size. The TV coverage you might have seen simply does not prepare you for the reality. To put Glastonbury into perspective, it’s like the whole population of Breaking More Waves home city of Portsmouth debunking to Worthy Farm for a long weekend. It’s huge. There are over 60 stages within the 8 miles of perimeter fencing that surround the 1,100 acre site.

Every year when the Glastonbury line -up is announced there’s a wave of negativity centred around the acts on the main stage and the headliners. Yet much of this negativity comes from people who have never been to the festival and have no understanding of what makes Glastonbury what it is. To use that well-worn cliché it really isn’t about the headliners. Last time we attended we watched 4 bands on the main stage all weekend. There’s such a plethora of undiscovered delights amongst the nooks, crannies and hills of Glastonbury that you can immerse yourself in, for pretty much as long as you can possibly stay awake. To try and describe all of these areas would require a website of its own (or rather why not just look at the very comprehensive official Glastonbury website), so instead here are just three of our recommendations.

Set within The Park area (pictured above) which is like a mini festival within the main festival itself, after a steep and tiring climb you’ll find the Crows Nest; probably our favourite venue at Glastonbury. Occupying one of the highest points on Worthy Farm, this part tipi, park shack gives fantastic views of the site and seems weirdly removed from the rest of the festival. The beauty of the Crows Nest is its intimacy and that the line up isn’t declared in the main program. Past years have seen the likes of Stornoway, I Am Kloot, Summer Camp, Metronomy and Frightened Rabbit play secret sets there. In 2011 we caught both The Bees and Caitlin Rose playing to tiny crowds at this venue. Example was also due to play there but pulled out his team supposedly declaring ‘the venue wasn’t right for him’. Whatever is on there this year is almost bound to be great, but shhhh don't tell anyone OK?

No trip to Glastonbury would be complete without spending a few hours in the theatre and circus fields (watch out for the unexpected walkabout performers as you wander through this area) and if it’s dry it’s lovely to spend time at the Sensation Seekers Stage; it’s the one that is almost guaranteed to have you in stiches. Expect the oddball and eccentric here. For example Glastonbury’s website promises “Dick Pulsing and Shona Norksof our Australian Fitness Gurus share their Morning Glory with you – lots of high-energy thrusts and plenty of jerking around,” and “Scarlet Lady, truly a multi-tasker, and a beautiful one to boot… Shackles, balloons, a whip, a ladder, and fire. Need we say more?” We’re looking forward to the thrusting and shackles. Sounds like fun.

Located within the Dance Village area this venue used to be housed inside a beautiful old wooden spiegeltent with bench seating surrounding the dance floor. For 2013 the Pussy Parlour is having an upgrade into a traditional circular tent with mansion frontage and bespoke décor. Glastonbury promises the venue will be in the style of a lounge bar with a large stage, a bar with seating and tables, and plenty of room for dancing. Of the acts playing here Saturday in particular looks a treat for new music fans, with the likes of London Grammar, Delilah, Laura Mvula and Sam Smith all scheduled to play on that day. Sam Smith first came to many people’s attention with his vocals on Disclosure’s Latch and likewise London Grammar have added their touch to the closing track on Disclosure’s debut album Settle. The track, Help Me Lose My Mind streams below.

If you’ve never been to Glastonbury before, for a full round up of what to take, where to camp, what to see and pretty much every question you would want to know answered we recommend the unofficial site GlastoEarth for further reading.

Our full Glastonbury 2013 review (our seventh time at the festival) will follow after it finishes, although we’re expecting a few recovery days before it goes on line.

Great blog post! Hope you're enjoying Glasto and like our personalised Vine for you in celebration of the great BBC coverage over the weekend. http://bit.ly/10qZeNK