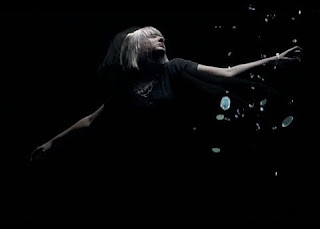 Here is a new song from Avec Sans. They’re one of those boy / girl electronic pop duos and we like them quite a lot. So much so that we named them as one of our ones to watch for 2013.

We were beginning to wonder if bestowing this title to Avec Sans was actually a kiss of death as things appeared to have gone pretty quiet in their camp, but all of sudden things are happening. First there was the sparkling ethereal remix of Curxes’ Further Still and now there’s this.

Here are 5 thoughts about Hold On.

1. Choosing a song title such as Hold On gives ample opportunity for a band to sing about a multitude of situations. Maybe a health and safety perspective could be explored, perhaps singing about ensuring that if standing on a London Underground tube train you hold on to one of the poles, rails or straps positioned in the carriage when it comes to a stop, for otherwise you might have a little tumble. Or maybe the song could deal with the difficult and often complex issue of having a few drinks at a music festival and then realising that there’s a queue for the toilets and that you literally are going to have to hold on? Alas Hold On doesn’t seem to be about either of these two things, which is a little disappointing. However, the silky rich electro pop tune that Avec Sans have created isn’t disappointing at all. Immaculately produced, it throbs and breathes with seductive digital age synth sounds.

2. Watch the video and ask yourself, wouldn’t this band be an ideal support act for Chvrches? If nothing else between them they could ensure that the Pet Shop Boys legacy of men with baseball caps playing synth pop continues well into this decade.

3. When Avec Sans first appeared on line there was quite a lot of talk about the bands ‘mystery’ identity. Now we’ve done all the ‘let the music speak for itself / they’re just shy / they’re just trying to create intrigue / actually they’re not very interesting people so why bother telling us anything about them,’ theories to death and frankly its getting boring. So let’s just move on. Besides we’ve been given names of the two people involved (Alice Fox and Jack St James) and in this video you actually get to see what they look like properly for a while. Isn’t that enough? Otherwise where do we stop? Soon we’ll be wanting to know where they buy their underwear from (we reckon he’s a Calvin Klein sort of guy and she’s a no-fixed brand but always classy undies kind of girl, for the record.)

4. Avec Sans now have four original songs and two remixes available for free download from here, which is very generous indeed. We recommend you grab them all.

5. On a more serious note, Alice posted the following message on the bands Facebook page recently.

“Last week my friend Chris, someone I've known since I was a kid, decided to take his life. We grew up together, when we were 11 we held hands in the dark in a cinema for about ten minutes and he was in my first ever band at 14. We were called Seth and Boothroyd and we were bloody awful. We got disqualified from a battle of the bands when our drummer went AWOL.

I've got a sadness I cannot shake. I feel like if he'd just waited out the pain or spoken someone it might have been different.

Suicide is the biggest killer of young men in the UK. This breaks my heart.

The CALMzone (CALM) is a charity I fervently believe in and last year did some work with to try and get their helplines running round the clock, which they now are.

I suspect a lot of us have been in that place where it's painful just to get through the day. But please try talking to someone; perhaps it's easier to talk to a stranger.”

Breaking More Waves would like to suggest that you download all of Avec Sans tracks for free and the money that you would have normally paid to own them you donate to The Calmzone, which you can do so by clicking this link.