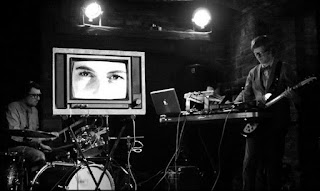 When last week we posted that we were taking a few days off over the Bank Holiday weekend and suggested that we were a little exhausted, we had no idea that the zero energy feeling we were experiencing was the beginning of a nasty bout of illness.

So our short break became nearly a week dosed up on (legal) drugs – our longest period of unplanned absence from the blog for a very long time. Consider it if you will our own version of the Test Card. (Those of you too young to know what the Test Card was, go Google it and get yourselves an education)

Thankfully though, we’ve proven that song by The Verve very wrong and shown that (if you’re taking the right type) the drugs do work. So now it's foot to the floor for Breaking More Waves. Or rather we're at least up into third gear and gently accelerating to fourth as we just shake off the last few aches, pains, stresses, sweats and other unwanted sickness attributes.

So before we get back into new singles, artists and our coverage of festivals, let’s start with a duo that together with the Ibuprofen, Codeine, Aspirin and Night Nurse have been keeping us going the last few days. Public Service Broadcasting’s debut album Inform Educate Entertain was released this week and has kept us feeling alive with its very unique, slightly quirky, very British (without ever being Brit Pop) take on pop music, although we use pop music in very much the broadest sense of the word. Taking the idea of using old public information films and archive footage and weaving them into their own sonic tapestry, Public Service Broadcasting don’t create songs as such, but pieces. But those pieces are made of gold.

Incredibly, for a band that are still ‘a small band’ the news today is that this week's UK mid-week album sales chart finds PSB at number 19. Now we know all the arguments about the chart not being relevant anymore, but if they aren’t relevant why in the last month have they been reported on in the national news at least twice as major headlines? And we’re pretty sure that anyone who has gone out this week and actually purchased the Public Service Broadcasting album will be pleased as punch to find that this oddball, multi-layered, eccentrically brilliant album sitting in amongst the likes of the Justin Timberlake’s and Rihanna’s of this world. It’s the triumph of the underdog. It's like a fine looking pair of brown corduroy trousers in a sea of denim - and that's something we can subscribe to.

If you’re passing a local record store this week (or if you’re just shopping online) this is a good week for new albums in many genre's. For dance pop fans Little Boots’ Nocturnes far surpasses her debut effort (one of the best pop albums of the year so far), for those who like intense focused noisy guitars Savages’ Silence Yourself will do the trick and for those who want something just that little bit different and that little bit special, Public Service Broadcasting is what you need. All three have certainly been our musical medicine during our malaise, why not give yourself a pick me up as well?

Public Service Broadcasting are currently out on the road on a huge UK tour, we highly recommend catching them, for whilst they may not have a huge budget to spend, every aspect of their show is carefully thought through, both musically and visually, plus the band have the most unusual method of in between song banter you’ll probably ever hear. We're saying no more than that.

Here’s the title track from the LP as well as the stunning Spitfire in visual form. Originally  from the War Room EP it thankfully has been included on the album as well.