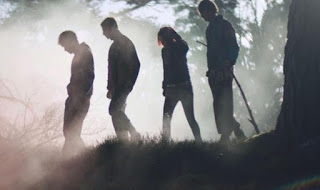 If you’re a fan of summery sounding shimmering synths and glossy electronic beauty then the new single from Scottish groove kids Discopolis is probably going to be right down your street. You may already be familiar with the Dubvision Remix of Falling (Committed To Sparkle Motion), a full on sweaty club banger that’s been doing the rounds for a number of months, but today we’re featuring both the original mix (via Soundcloud) and then the radio-kissing polished to perfection version from Axwell, owner of Axtone records and one third of the recently split Swedish House Mafia. Both are lush but it's the Axwell Edit (streaming via You Tube) that has the oomph that takes Discopolis from the margins to very close to the centre, without ever losing the magic.

It’s been over a year since we’ve featured Discopolis on the blog and since then they’ve become a four piece with the addition of drummer Cat Myers. If Falling (Committed To Sparkle Motion) is the output of waiting all that time, then we’ll happily wait another year for Discopolis to hook up with some other big producers. Roll on 2014 then?

Email ThisBlogThis!Share to TwitterShare to FacebookShare to Pinterest
Labels: Discopolis