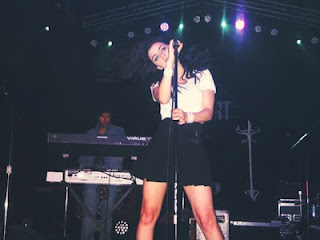 5 things about Charli XCX and her new video for Take My Hand.

1. Take My Hand is taken from Charli’s debut album True Romance, which all in all is very good. In fact we’d take that very good a little further and say it’s nearly amazing. Not quite, but nearly. It’s certainly up there with Little Boots’ Nocturnes as one of the pop albums of the year so far. Little Boots’ work is in places more melancholy and has dashes of sodium lit late night minimalism whilst Charli’s is more late night rainbow coloured hyperactivity but with plenty of streaks of inky gothic black running through it as well. But they're both very good nearly amazing.

2. Take My Hand is Charli’s pill popping night out on the town losing control dance anthem. (Warning: Drugs are not good). “Can you feel the neon lights? It's like the Milky Way. I’ve swallowed something stupid it’s making me stay awake,” she vocalises. Of course maybe she isn’t referring to a naughty little drug and actually the “like the milky way” lyrics are referring to another similar chocolate product – maybe a Fudge or Mars perhaps? (Warning: Too much chocolate is also not good, it really can keep you awake.)

3. Three years ago we wrote more about confectionery and Charli XCX : “There is something about her riot in a sweetshop zest that makes us want to climb out of the bedroom window late at night and go raving with her, whatever the consequences.” This video is that going raving with her moment, paying homage to Charli’s early electroclash roots in a raw (but noticeably unsweaty) club. The club in question is Corsica Studios at Elephant And Castle in London.

4. We’ve seen Charli XCX being referenced as “Tumblr pop” in certain places. Let’s be clear about this, Tumblr may be an internet platform but it isn’t a genre of music. After all who would be a Wordpress band ? Grizzly Bear perhaps? And what about an old school Blogspot band like the platform this blog is on? Maybe Suede? No, it’s all wrong. Very wrong. But this song is very right.

5. Let’s dance. It's the weekend and this is great pop music.