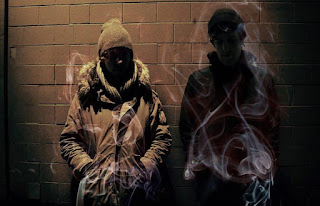 Today we’re introducing a duo from Canada who describe themselves as a ‘dynamic  live indie electronic pop act in the vein of LCD Soundsystem, Jamie XX and Junior Boys’. Having first released an EP Avec Mes Mecs back in 2010 Humans are hardly a new act, but their profile in the UK, where Breaking More Waves is based is relatively low, so it seems about time that we attempt to raise that a little. It will probably be upped a little further when Humans hit the UK’s shores this May.

The song that first grabbed our attention and streams below is the rather dextrous Possession. With its syncopated rhythms, grooves, vocal yelps and chants it draws comparison to California’s Local Natives if that band had ditched the guitars and organic sounds and instead embraced keyboards and computers.

In fact Humans use a lot of keys and computers.  Their website lists all of the technology they use to create their music, and whilst there is mention of a guitar the remainder looks like a geeky tech kids wet dream with microKORG synthesizers, Roland SPD-S samplers, Korg Electribe ESX synthesizer/sampler, a Roland MC-505 groovebox, an Elektron Octatrack sampler, and the microKORG vocoder all getting a mention.

Yet despite this technology the name Humans sits with the band very comfortably. For whilst there are pounding beats and electronic licks throughout their highly danceable music their sound is never robotic, instead it possesses a looseness that makes their music seem very, well…..human.

Human’s most recent release is a cover of Chris Isaak’s Wicked Game which will feature on a forthcoming mini covers EP which will also include the Streets of Philadelphia by Bruce Springsteen. Watch the video at your peril. Warning – it contains lots of tongues, kissing, fluids, puppets and er…substances. You might find it a little gross.

Email ThisBlogThis!Share to TwitterShare to FacebookShare to Pinterest
Labels: Humans