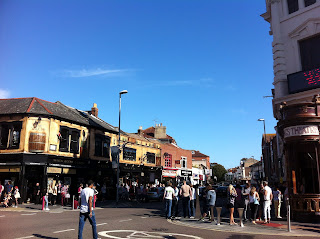 To fully understand the mood of many a Southsea Fest punter, an independent multi-venue music festival on one street in the more offbeat seaside district of Portsmouth, overheard conversations probably give the best pointer of many people’s mindset. “Who’s this band then?” “No idea mate but they’re bloody brilliant.” “Yeah, fancy another drink?” “Yeah OK, let’s go to the bar then.”

For whilst Southsea Fest has been slowly cultivating itself as a simpler and cheaper alternative to other emerging new music festivals (Great Escape, Camden Crawl, Dot to Dot) it also carries the weight of being a day out on the lash for locals, the music being just a background excuse for getting wasted.

That’s not to say that every punter is a stumbling beer-in-hand lush, but certainly as the day developed the amount of chatter and general disinterest in some of the bands playing by certain sectors of the audience took something away from what is otherwise an excellent value for money event. However, even a few drop outs from the advertised line up (Eagulls, Joanna Gruesome, Peace, Bastions and Hymns were all still named on posters outside one of the venues but had been confirmed by organisers as no-shows) didn’t detract from a number of powerful performances that were intoxicating without any form of boozy intake.

1.Southsea Fest may be full of new / emerging music but there's no industry 'buzz' about the place.

Unlike the likes of Brighton’s Great Escape, Southsea Fest remains relatively distant from music industry influence, retaining its own independent take on things. Combine that with an audience that at least a percentage of which don’t seem to know anything about any of the bands on the bill and the result was a lack of queues to get in to see ‘the next big thing’.  Maybe the next big thing played at Southsea Fest 2012, but if they did it didn’t attract music industry, cool kid and hipster attention and was all the better for it.

2. However there was a bit of a buzz about local types Bear Cavalry

Fresh from signing a deal to release an EP with Alcopop! records the band played 2 sets during the day in both the Wedgewood Rooms and a ‘not so secret’ show in its sister venue The Edge of the Wedge. We caught the later – a brassy, bouncy, bubbly carnival indie flavoured set that cheered the soul. Hear one of their songs streaming below.

3.The Kings Theatre, Southsea is a wonderful place to see live music and the jewel in the crown of the event

Stepping inside from the bright bustling street into the dark but elegant opulence of the Kings Theatre, a beautifully different element is added to Southsea Fest. The balconied Edwardian Playhouse creates a powerfully tall architectural space that gives an extra dimension to performances – the auditorium coaxing out the best of local lads The Dawn Chorus who played their final ever show with the whole audience on their feet for one final Arcade Fire-esque rousing sing-along and the cinematic folkiness of Old Colours who added a gentle sweetness to proceedings. Whilst not being quite fully formed yet they're a band who show promise for the future. You can hear their song Hunting Ghosts streaming below.

Brighton’s Amongst The Pigeons struggled to hold much of his audience's attention with his mash-up of club based samples, loops and beats. Battling against a bizarre piece of scheduling and venue (an evening set in a dark club atmosphere would have suited far more than lunchtime in a backstreet social club) and a crowd who weren't interested in dancing and more interested in chat and drinking it was always going to be an uphill struggle with laptop in arm. Likewise ex-Ash girl Charlotte Hatherley received a muted reaction to her new project Sylver Tongue, whose 80’s new romantic and sci-fi synths seemed to lose their way in the lager covered floors of the Wedgewood Rooms.

Two of the day’s most thrilling sets came from bands that have been regularly featured on Breaking More Waves. Industrial-electro-pop duo Curxes were found playing to a packed room under the trusses and oversized lampshades of the Wine Vaults, with the small of stature yet big of voice lead singer Roberta Fidora bringing a dark ferociousness and dominance to her performance as she transferred from on stage to singing in the middle of the audience. Later that night headliners Clock Opera found bountiful love from a Southsea crowd, buoyed up by the bands stuttering yet life affirming sample based pop music and the odd drop of alcohol or two.

6. Southsea Fest had the most amount of facial hair we’ve seen at any festival this year

Guy from Clock Opera wins the award for best facial hair on stage, but amongst the crowd we heard rumours of Jesus or Socrates walking in Southsea, with at least two of the longest beards ever known to man being spotted.

If you follow us on twitter or have read this blog for any period of time you’ll know that we like the word amazing but prefer to write it like this: A.M.A.Z.I.N.G. We pronounce it A dot M dot A dot Z dot I dot N dot G. So imagine our joy when new London based band F.U.R.S announce from stage that they are called ‘Furs spelt F dot U dot R dot S.’ A moment of shared love for the dot. Their effortlessly cool 60’s referencing jangly guitar pop was consuming in its loveliness as well - a band that we suspect we could quickly become quite attached to. Watch this space.

8. Sometimes a band making a hell of a racket in a tiny cramped sweaty room with no ventilation is a very good thing.

Playing in what appeared to be no more than a sweaty padded cell, under flashing red lights, the pulverising zoned-out guitars and submerged vocals of Is Bliss was viscerally exciting; a bomb scare of a band.

9. If you like dubstep, disco, house or any sort of dance music Southsea Fest is not the place for you.

Southsea Fest knows its audience and caters for them.

10. Grown men hugging can be a beautiful thing

We witnessed a euphoric moment of two strangers hugging each other in joy during Clock Opera’s set. Even if a little beer was involved it was a touching and rather glorious moment. All of the best festival moments are about love and that moment was one of them.

Southsea Fest 2012 was undoubtedly a success for everyone involved. Independent, with a strong local feel, we just hope that not too many punters woke up with hideous hangovers the next day.

Amongst The Pigeons said...

My set may have been a struggle - but I certainly had fun - thanks for coming to check me out.

Had a great time (Clock Opera + Pale Seas were awesome) in spite of the somewhat ramshackle organisation of the event - stewards letting non wristband people (their mates?) into venues, a programme that was out of date with no updates on cancellations and some venues running hideously over time.

Having said all that for the price we paid we still got value - saw 8 bands, most of whom were decent, had a few drinks, and even lost (and then found) my mobile phone.