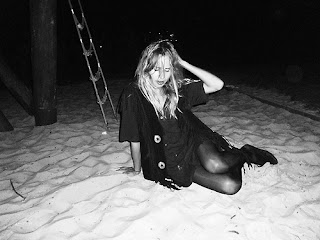 Ottilia Zimmerman Kjulsten is a bit of a mouthful, so we’re thankful that this new Swedish singer has adopted the moniker Ottilia K, or even just Ottilia, depending on where you look. So for now we’re calling her just Ottilia because we’ve always believed that simplicity is best.

Originally from Uppsala, Sweden, but now based in the UK, Ottilia has been posting stark acoustic demos to the internet for the last year or so, but it’s her latest offerings, Heartless and I Don’t Let Myself Fall In Love that stand out. Reminiscent of second album Lykke Li Heartless is a despondent anthem of the used and hurt. “If I had a heart left to love you I would do, I would do,” she intones mournfully over slow beats and atmospherically melancholy music. I Don’t Let Myself Fall In Love is even better though. A sparse torch song it finds Ottilia sounding beautifully bitter; “love has no sympathy, that’s why it will be the death of me.” Imagine this song on the closing credits to an impossibly sad romantic film, with the audience blubbing their eyes out, desperately hoping that the cinema lights don’t come up yet.

Not everything Ottilia has wrapped her vocals around is so gloomy and troubled though. A short scurry around the internet and you’ll find her adding some weight to a house track called Candles & Fog by Cubiq from Oxford (listen here). She’s also been playing a number of gigs around London this summer and will be stepping out of the capital to play Gathering Festival in October.

There's also a whole collection of her demos on her Soundcloud which may lack in production values, but there's enough quality there to suggest that if these songs were given some sheen and space to grow Ottilia could be finding many more appreciative ears.


Ottilia - I Don't Let Myself Fall In Love

Email ThisBlogThis!Share to TwitterShare to FacebookShare to Pinterest
Labels: Ottilia

Lovely stuff. I blogged about Ottilia back in December after hearing her track "40 Million Light Years". Unfortunately that track appears to have disappeared into the netherworld, but hopefully it will pop up again.