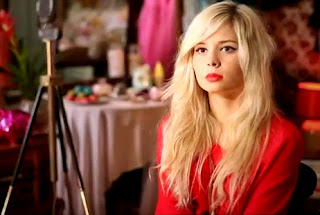 If You Tube views are the new currency then Nina Nesbitt may not be Psy or Lady Gaga like rich but she’d at least be well off enough to get a nice little flat somewhere with ample space to store her guitars. When we first watched this video just 24 hours ago there had been a couple of thousand views but as we type this she’s already up to nearly 100,000.

So now that we’ve established Nina’s current value where does she fit within the musical landscape? The pop Laura Marling ? The folk Ellie Goulding ? The female Ed Sheeran ? The best blonde Nina in music since The Cardigans ? This is what happens as a new artist – bloggers and journalists reel of a list of comparisons, not because (as they are often criticised as doing) they are being lazy, but because it gives some reference points for readers to understand if the artist’s songs might fit within their taste zone. It's not lazy - it's trying to be helpful. OK, maybe the Nina one was just a bit lazy. Blonde. Female. Both called Nina. That'll do.

It was just a few days ago that we streamed the MP3 of Boy, but now you can decide your own similarities (or just accept Nina Nesbitt for being Nina Nesbitt - no reference points required) with the video of this frothy tune that features one of the most omnipresent lyrical themes in pop music; the end of a relationship, which it seems people never tire of listening to.