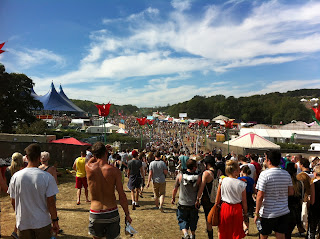 In 2011 when Michael Eavis surprisingly claimed Glastonbury festival had "probably got another three or four years” before the event came to an end, perhaps at the back of his mind he was referring to the fact that there’s another event that is getting very close to stealing the festival crown. Now in its ninth year, last weekend’s Bestival on the Isle of Wight pulled out all the stops to arguably position itself as the new king of festivals in the UK, or at least the prince in waiting.

Put quite simply Bestival is an incredible experience. Organiser Rob da Bank and his wife Josie have created a world of colour, artistry, love, beauty, friendship, attention to detail and quite phenomenal music that puts other festivals to shame. It’s a festival that feels totally removed from reality, having an open-minded atmosphere that harks back to hippiedom, whilst maintaining a cutting edge and vibrancy that maybe Glastonbury has lost a little. At the end of four days of body and mind destroying fun, coming home afterwards on the ferry across the Solent feels like the end of the greatest summer holiday romance. There’s an empty sad feeling; as if a piece of our soul has been sucked out and taken away.

So here, in the normal Breaking More Waves style is a review (of sorts) of our favourite festival of summer 2012, or rather…

1. A great festival is the sum of its parts, but the third most important thing is the weather.

It doesn’t matter how enchanting the aesthetic of the site build is, if it’s turned into something like a World War 1 quagmire by battering rain storms, as survivors of Bestival 2008 will testify, nobody is going to take much notice or care. Thankfully Bestival 2012 was blessed with sun cream spreading sunny weather. So it was easy to appreciate the visual splendour of the ‘swandoliers’ (lights in the shape of swans on poles), sculptural coloured striped blocks with love hearts atop them, weird installations that looked like giant fibre optic spider plants, stages that took the form of run-down swamp shacks and much more. Bestival was a colourful and wonderful assault on the eyes.

2. A great festival is the sum of its parts, but the second most important thing is the music.

It doesn’t matter how great the weather is, if the music isn’t brimming with quality the event is going to struggle to hold your attention. At Bestival set after set delivered that quality. The XX’s whispered intimacy kissed the ears tenderly under clouds of slowly drifting dry ice and minimalistic lighting, contrasting perfectly with Florence & The Machine’s euphoric bombardment of the ears complete with orchestra and choir. Alt-J found themselves humbled with a huge crowd on the replay stage and rewarded them with a note perfect set of their quirky oddball folk-step grooves, proving that often the best bands are the ones that take a risk and do something different. The Other Tribe played three times in one day and provided plenty of opportunities for people to sweat with their bone shaking non-stop indie rave grooves and then of course there was a certain Mr Stevie Wonder who probably drew the biggest crowd ever seen on the main stage at Bestival.

3. Bernard Sumner from New Order would like to run a pop quiz. (Maybe).

“Guess who we are then?” questioned Bernard as his band took to the stage. “This is a Joy Division one can you guess what it is?” he asked later. We got both questions right, but then we’re pretty good at pop quizzes.

4. There’s nothing like a smile, some chat and a cup of tea from a nice lady in an apron.

A Bestival institution, the ladies of the Women’s Institute were on hand at the top of a steep grassy incline affectionately known to Bestival regulars as The Hill of Death to provide tea and delicious freshly baked homemade cakes for just 70p each to the weary and the hungover. These angels in aprons were the real headliner of Bestival 2012, their tent being their own version of heaven.

5. Blog buzz doesn’t necessarily equal large crowds. (We may have said this before)

Say hello to Brooklyn’s Ms Mr, a new pop band. There were 50,000 people at Bestival. We would hazard a guess that between 100 and 200 watched their debut UK performance on Saturday afternoon.

6. But as a new band blog buzz probably does help a tiny bit.

On Thursday night San Zhi’s gorgeous dreamy lullaby pop was witnessed by a crowd of less than 50 people at the Replay stage. This was a real shame as it was really rather pretty.  A quick search of The Hype Machine suggests that just 2 blogs (one of whom is this one) have written about them. By our calculations based on the number of Ms Mr Hype Machine blog write ups and San Zhi’s blog coverage so far, as a new act who has yet to release a single, for every blog that writes about you at a 50,000 capacity festival you’ll get an additional 1.72 people in your audience.

7. Kate Nash’s new songs aren’t all as bad as Under Estimate The Girl

Until they disappear from twitter, find our thoughts on Kate Nash’s gig at Bestival by searching on #katenashlivetweets2 . Warning : Includes pictures of Kate Nash dressed like a tree. We found this strangely attractive. Later that day we DJ'd inside a tree at the festival. Maybe there's some deep rooted connection there.

8. Charli XCX wins the award for best dancing at Bestival.

Imagine dancing to the Spice Girls in your bedroom with a burning firework up your bum, add in a bit of street kid aggression and save that image.

With Azealia Banks pulling out of Bestival due to exhaustion it meant that the running order for Saturday’s Big Top stage was revised. So we were able to catch a number of artists who we thought we were likely to miss due to timetabling clashes, namely Jessie Ware and The Other Tribe. Sorry you’re knackered Azealia but you were a big help to us.

10. A great festival is the sum of its parts, but the most important thing is people that you attend with.

Breaking More Waves was honoured to attend with the best set of people in the world.  We’re not going to ‘review’ them but if you sat in our car on the way to Bestival we give you 10/10.

Tragically the day after Bestival a coach transporting passengers from the festival to Liverpool crashed on the A3 near Hindhead killing 3 people and injuring 50 others. No words can express our sadness at this event and our thoughts are with the victims families, friends and loved ones.

The XX - Angels (Live at Bestival)