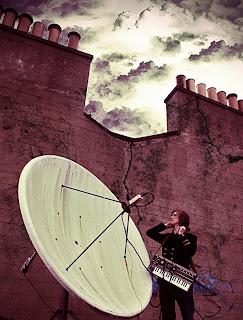 What is it with these kids ? Having recently posted about Unicorn Kid and Casio Kids we now feel compelled to make it triplets and bring to your attention the massive sound of Kid Adrift. If you took a big raft of overblown pompous rock and set it off through a computer, mashed in some dubstep beats, a layer of distortion and gave the whole thing a post-apocalyptic shove of electronica you would probably be lurking off the same shores as Kid Adrift.
The twenty one year old Glaswegian is creating a sound that is gloriously gargantuan. Red Green And Blue has already picked up significant radio play off the back of a CD that Kid Adrift handed in to BBC Scotland DJ Vic Galloway and since then Huw Stevens and Nick Grimshaw on Radio 1 have been blasting the song out, and believe us blast is the right word. It’s speaker shattering stuff. Whilst for a whole variety of complicated reasons relating to the greyness of the law relating to ownership of music we don’t post tracks for download on this blog, Kid Adrift has very kindly produced a neat little widget that allows you to listen to the track below. There’s more of this to come as well. Another Kid Adrift song, Customer Satisfaction sounds like Mozart gone mad with a laptop. Fantastic. It’s early days but Kid Adrift is certainly one to file under that well worn tag of one to watch. Modern classics such as these will be available on his debut EP due for release later this year.
Posted by Breaking More Waves Blog at 00:01

It says on Kid Adrift's website that Red Green and Blue was released on August 1st? I can't find anywhere to buy/download it!

He's been signed to a major label now. Gonna blow up for him later this year. Thanks for the original tip.