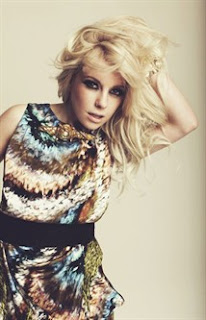 Remedy is the new single from Little Boots.
In this age when singles that aren’t even officially released yet can enter the chart, Remedy is already at number fourteen and has been loitering there for seven weeks. Once an album is released and any single track is available for download, the notion of singles having an official release date is virtually obsolete. However for those who wish to own a physical format of the single, some new remixes or just help propel Little Boots further up the chart, your official chance comes next week.
Remedy is the Little Boots single that New In Town should have been. If Princess Leia went blonde, swapped the light sabre for a Tenori-On and stabbed the keyboard with a dazzle of Lady Ga Ga meets Britney meets Kylie ish hooks then this tune would have been the result. It’s pure pop that would get even the stiffest storm trooper swinging its hips. It may not be particularly original or have the geeky charm of Stuck On Repeat, but it’s still a fine moment of commercial electro fun. We hope it's not too late to save the album from the bargain bins and that a rise up the charts will now commence. As we have said before, the album deserves to be a bigger commercial success than it currently has been. Remedy may not cure all the ills created by New In Town, but it's a neat spoon of pop medicine that makes us feel a hell of a lot better.
On a side note, in a previous post we stated the absolute need for pop stars to be sexy, that sex sells and that Little Boots hadn't quite achieved that for us. Having watched this video we retract that statement. Totally.
Posted by Breaking More Waves Blog at 00:01

Sounds like you need a cold shower - or a dip in the sea (but without your phone this time). Have to agree this is a much better song/video/look combo from LB.

Phew. Yes got a bit hot under the collar there. Well it seems that the UK public agree about Remedy - it has charted higher than New In Town (No.10 ) even though the album has now been released. If this had been the first single from the album it would have gone Top 5. The album seems to have stalled at 34 though after 1 week at 5, then dropping out of the top 40 then sneaking back in.