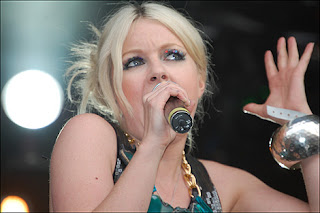 Did we say that we were becoming obsessed with the UK chart position of Little Boots ? Yes we did and yes we are. The single Remedy holds steady at number six this week and the album remains at twenty five. This has probably been helped with the recently released 99p bundle offer that includes the cover of the JLS song Beat Again, which is very good and is shaped a little bit like a Duran Duran track. The question we ask is if hardly anyone is buying recorded music these days, is chart placing really relevant ? Does anybody actually care other than Breaking More Waves ? We wrote about 'success' before here and here, and these blogs relate in particular to Little Boots.
So to answer the question, does anyone care ? It seems that some do. Have a look over here and you will see that the most discussed and viewed thread is the chart position of Little Boots. It’s good to see that some people are still as absurdly fixated as we are.
Here’s another cover version from Victoria. Before the Lady Ga Ga comparisons started with Remedy, back last year several commentators noted that there was a little bit of vocal similarity between Little Boots and Kate Bush. So here Little Boots does the obvious.
Posted by Breaking More Waves Blog at 12:01