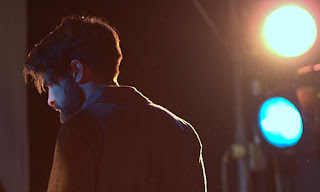 A short while back we introduced Clock Opera, a staggeringly brilliant group who have produced one of our favourite songs of the year in Once And For All. It’s an astounding piece of work - part pop song, part electronic symphony of the highest atmospheric order. It's our most played tune of the last month and when we play out under our occasional DJ role we are currently using it as one of our opening tracks. Now it’s time to meet Guy Connelly, the genius behind Clock Opera's experimental harmonies. Trust us. This lot are good.
Hello Guy. OK first of all we are going to gush like an excited teenager and tell you that Once And For All is one of our favourite songs of the year. Please can you tell us about the song, we’re desperate to know more.
Thank you! You are a kind one. Actually, the teenage nature of your gush is appropriate as the song was inspired by fifteen year-olds. I saw this amazing theatre show called Once And For All We're Gonna Tell You Who We Are So Shut Up And Listen about what you do when you’re that age. It started off with them talking, fighting, having a laugh, making stuff and knocking it down, and you couldn’t work out what was going on. But then they repeated exactly the same thing in different ways. Anyone younger or older couldn’t have done it and I loved that we were watching something that wouldn’t exist for very long.
It made me remember exactly what it was like to be fifteen, and realise what has changed for me since. When you’re that age, there are some things you just know. You don’t ever expect to forget them, but you do. Watching the play made me wonder whether anything I am certain of now will disappear in the same way.
We know very little about you, but you appear to have created some really interesting, unusual and exciting work already. Can you tell us a little bit about your background and your work for theatrical companies that you have been involved in?
I used to be in a band called The Fallout Trust, which became The Corrections. Then I started Clock Opera, and about the same time wrote a score for Rambert Dance Company using strings, samplers and bits of metal (as in dog bowls and old car batteries, not Sepultura. Since then, I’ve worked with (the amazing) Tangled Feet on a few things and done a couple of short films.
My experience of being in a band is that you write something, rehearse it, demo it, play it at a gig maybe, record it, mix it, then maybe someone puts it out some time later, when “the time is right”, which can easily equate to “when everyone involved is bored shitless with it”. With Tangled Feet I wrote the music and it was played to people almost immediately, which I absolutely love.
So many musicians in bands don’t do anything else. I used to be one of them. That can melt your brain. Doing other things keeps all of them happy and fresh. This is what I have learned and it is a great and original revelation, I’m sure you will agree.
It seems that you have only played live so far a very small amount of times, how have those shows gone and are there plans to play live more often ?
Amazing. Yes, we’d only played a couple of gigs when people started getting in touch. Now we are veterans after four gigs. We’ve only just got to the stage of being able to play the songs without our eyes coming out on stalks, so we might start having more fun on stage soon. A load more gigs are coming up soon.
We hear you have been working with Graham Stewart who has worked with Radiohead. How did that come about?
I produced an album with Graeme for The Corrections. He seduced me by letting me play on Thom Yorke’s old guitar. Now we are friends and like doing things together so he’s been helping me with mixes of my new songs.
Can you tell us a bit about how you go about constructing a song?
Record something quickly. Guitar or piano or whatever’s lying about. Don’t stress about quality. Chop into tiny pieces. Reconstruct. Hit whatever is near. Wail nonsense. Write words. Re-write words. Trim. Mix. Play.
Are there plans for any physical or on line releases to purchase?
Recordings are ready to go. Hope to have news to reveal soon.
This is a question we have been asking every band / artist we interview. What is your take on illegal downloading?
Simultaneously amazing and frustrating. It’s massively liberating how loads of people can get to know you really quickly and it’s revolutionary to be able to listen to anything you want, anywhere, any time. What bugs me is that, even if people love your records, you have to rely on other ways to make a living as an artist than just to make music. I love playing live, but resent the idea that you must do in order to survive. What do you do if your music can’t be re-created at a gig? Overall, I think it places greater reliance on advertising to support music, rather than music supporting itself, which doesn’t fill me with joy.
Now, imagine this is a job interview. Where do you see Clock Opera in five years time?
The gutter. Do I get the job?
Another job interview question- What do you think is the greatest strength of Clock Opera?
Blind optimism.
And finally – What is your favourite opera?
None. To be very generalistic, I like the music, can’t stand the singing. Maybe it’s like olives, and I will do one day.
Thanks Guy, look out for more gigs and a debut release from Clock Opera soon ! Here's a trailer for the play that inspired Once And For All.

I recently came across your blog and have been reading along. I thought I would leave my first comment. I dont know what to say except that I have enjoyed reading. Nice blog. I will keep visiting this blog very often.

Thanks. If you enjoy the blog don't forgot to add yourself as a follower or subscribe !