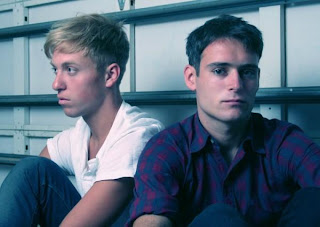 So after nearly two weeks soaking up the summer sun in Spain, Breaking More Waves is back; not that you missed us anyway with all those posts written and scheduled in advance. So here’s a few more. Because after a quick pit stop, by the time you read this we will have set off to continue our summer of festivals at Summer Sundae in Leicester. In the meantime whilst we’re still on a holiday vibe of sun, sand and sangria here is a new single from Brooklyn dudes The Drums called Let’s Go Surfing. It’s being released in the UK on Moshi Moshi in mid September.
Featuring the best whistling on a song since Peter, Bjorn and John’s Young Folks, the song is a perky number with a sea bound sound that radiates cheer. The band formed recently when long standing friends Jonathan Pierce and Jacob Graham got together to collaborate, and although these two form the core of the group, they have subsequently expanded to a four piece. The reason for the bands name is simple, they chose it because “they thought it sounded just so cool.” In visualising what The Drums would look like just from the song, without seeing the video, one would expect vintage 50’s or 60’s Beach Boys Hawaiian shirts combined with preppy cardigans like Vampire Weekend and long grey overcoats straight out of the late 70’s early 80’s Manchester post punk scene. It’s an odd blend of influences but is irresistibly head nodding. Now let’s get down to that beach again and enjoy the singing, stringing, twanging and banging of The Drums. Surfs up.
Posted by Breaking More Waves Blog at 00:01

Email ThisBlogThis!Share to TwitterShare to FacebookShare to Pinterest
Labels: The Drums

Heard these guys on radio 1 the over day- superb band! Thank you for reminding me of them.

Yes it's a neat simple little song. I wonder if it will be a 'one off' or if they will be able to follow on ??