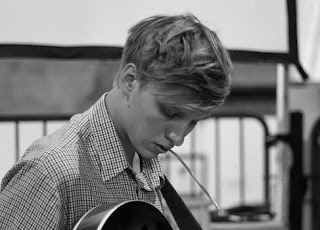 George Ezra could probably sing about sitting on the toilet or doing the washing up and it would sound fantastic. The phrase that crops up time and time again is that classic cliché “a vocal beyond his years,” and really, whilst it is a cliché it’s fully justified in the case of Ezra. His crooning, weather-beaten, warm soulful tones are show stopping and seem even more stunning when you see what Ezra looks like – just a regular looking guy with almost boyish looks.

Ezra first came to our attention with the hushed and melancholy It’s Just My Skin uploaded to Soundcloud about a year ago and since then has busked his way round Europe, played to a packed BBC Introducing tent at Glastonbury and supported the likes of Stornoway and Tom Odell. His debut EP Did You Hear The Rain? released this autumn picked up plenty of evening radio play on BBC Radio 1 (as well as blog support, including of course from Breaking More Waves) and with a London show next January already sold out, Ezra’s star is undoubtedly rising – and deservedly so.

George Ezra - Did You Hear The Rain? (Video)

Email ThisBlogThis!Share to TwitterShare to FacebookShare to Pinterest
Labels: George Ezra, Ones to Watch 2014