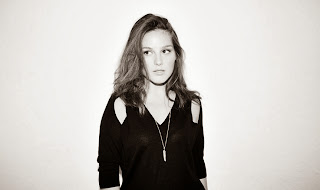 “A touch of the Adele's about this one. Someone blog it please? (I would but I'm busy baking cup cakes - rock n roll),” we tweeted the other day after finding new artist Norma Jean Martine on line. It seems our request was ignored, although a subsequent search on Hype Machine showed that a couple of popular American blogs (Pigeons and Planes plus Hilly Dilly) have already streamed No Gold, so at least somebody has been thinking the same way as us.


Pigeons and Planes called Norma, a 21 year old singer originally from Middletown USA but now based in London, a bluesy pop singer. On the basis of that one song we wouldn’t disagree with that, with its organic thump and southern belle drawl it certainly mixes something rootsy with the gloss. However, the live material streaming on You Tube shows that Norma can produce a far greater depth than pure pop music.  On No More Alone she sits at the piano accompanied by just a guitar and moves mountains with her composure and exquisitely touching vocal performance. It’s another one of those wow moments; elegance and emotion of the highest order. Press play below and we’re pretty sure you’ll agree that Norma is a very special talent indeed.