How Do You Organise Your Music Collection ? (A Geeky Blog Post) 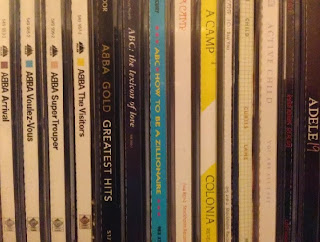 Nobody has ever asked us if they can scroll through our iTunes, yet plenty of people have wanted to rummage through our physical collection of music. This is important.

MP3s have plenty of advantages. They are cheaper, they are transportable, you can send them over the internet, feature them on websites and they take up a lot less space. Yet despite the pros, the cons are that they deprive our well trained senses of a fuller experience.

So if physical music collections are important, then it makes sense that we should treat them with the respect they deserve. This means embracing your inner geek and accepting that the order you store your CDs and vinyl in needs careful consideration. If like us you own thousands of the things then unless you want to select material on the basis of something similar to the iTunes shuffle facility this is going to mean arranging your collection with some sort of logic. Thankfully this is where the alphabet is our saviour. It makes things easy.

Take the start of our collection under the letter A. The first bands we have are Abba, ABC and A Camp, in that order. But wait, shouldn’t A Camp come before Abba as it’s A ‘space’ Camp? Or should (as iTunes does) A Camp be stored under C? After all we file The Beatles under B rather than T. But then what of Abba and ABC? Our slightly dog-eared British Hit Singles & Albums book arranges everything in alphabetical order but places ABC before Abba. Even more confusingly it places A Camp after ABC but before Abba. Our logical ordered world is troubled with dizziness. And remember THIS STUFF IS IMPORTANT.

Next take Kylie Minogue. Now that’s easy. She’s under M for Minogue. But what about when she dropped the Minogue from her record sleeves and just became Kylie? Should we then file her under K? After all Madonna and Prince are both filed under their first names as is Adele (not far behind A Camp). Then there’s the added difficulty of collaborations. Where do we file the single of Where The Wild Roses Grow by Nick Cave and Kylie? With our Kylie records or with the Nick Cave ones (which could be quite close to those bloody A Camp albums if we choose the C option for them). And where exactly does Nick Cave & The Bad Seeds go? Under C for Cave or N for Nick? Maybe we should buy two copies of that particular record and put one in each slot?

Then there’s compilations. Where do we put those? At the end? The beginning? Under V for various artists? And in what order? Date? Alphabetical order of title? The possibilities get scary.

And what about acts like Dan Le Sac and Scroobius Pip who then each go on to have solo albums? The more we think about this particular example the more exasperated we become.

And don’t even mention numbers. Do 2 Unlimited slot in with the Ts, or go at the front or back of the collection in number order between 1 Giant Leap and 3 Colours Red?* And if they do where do the numbers written as words such as The Three Degrees go?

And before we lose the plot completely what about bands that change their name but are the same act? For example the original Sugababes now known as MKS? Do we separate their records up? And does MKS come before Madonna (assuming she’s not under Ciccone somewhere near the refilled A Camp) or after her?

Oh f*ck it maybe iTunes is easier after all.

** Important footnote number 2 – other methods of organisation are available. However with thousands of CDs rearranging them into one long chronological order, by genre or even by the colour of their spine fills us with time consuming dread.

Email ThisBlogThis!Share to TwitterShare to FacebookShare to Pinterest
Labels: A Camp, Discussions

LOOSE genre (Pop/Dance/Experimental - No mucking about with Deep House/Nu-Disco/ElectroPop/Shoegaze etc...) > Alphabetical within loose genre (Yes, spaces DO count) > Chronological within artist (Singles either side of album depending on release date)

* Weirdly, I go by first name rather than surname, so never had the Kylie issue.
* Compilations at the end of each genre.
* Numbers at the beginning of each genre.


Two things I hate about being an obsessive CD organiser.
1) Box sets and their inability to fit anywhere (shelf wise). The shelves I've got have a couple of centimeters gap between the top of a jewel case and the next shelf that some box sets can just kinda' lie on. The rest. God knows what I do with them.
2) When buying a new CD; finding where it goes, and then shifting the entire collection along one space is a whole afternoon's work!

Ah Re: 1) and 2) YES ! I have exactly the same problems. The moving everything along to create a space is such a chore - especially when my girlfriend takes a CD to work and I don't realise, buy something new, fill the space she has created and then she gets home can't fit the CD in so just leaves it somewhere else. Several months later I can't either a) find the CD or b) find a pile of CD's that she hasn't been able to fit away and have to spend even longer creating lots of spaces!

The biggest problem I had int terms of sorting out my albums chronologically is deciding where to put my album by "!!!". Fortunately, someone came up with the ingenious solution of turning the album upside down and putting it in the "I" section.

So bands that have fictitious names like Jethro Tull are easy - they go under "J". But what about bands that are named after their leaders (Dave Matthews Band)? "D" or "M"?

For me that's an M, (as I'm a surname preference organiser). Although I think first names would have probably been a simpler way to go if I'd thought things through :(

Don't even get me started on split-singles...

I've always filed with the artist as well, on the basis there has been some artistry in the curation (and its just easier for me to remember that way)

I personally like to classify solo artists by their first name rather than their surname, but my boyfriend is the opposite, which lead to strife! (he won)

Our records are organised in the following ways:

Within "new purchases and old classics" we've alphabetised; "for DJing" is sorted by loose genre then alphabetised, and "old but not classics" hasn't been sorted at all.

A couple of our biggest question marks were split releases, Simon & Garfunkel and Rev Hammer

1. A Camp is tricky: I have it placed first, together with A Girl Called Eddy. But maybe "A" should be considered equal to "The".Then ABBA would be first, which seems best somehow.
2. J.Geils Band - sorted on G, in the beginning of J or between Jethro Tull and Joy Division?
3.Tom Robinson Band - sorted by "Tom", "Robinson" or "TRB"?
4. Another very annoying thing: The manufacturers that print the back labels on 5-10% of the CD's upside down, forcing you to decide if you want to have to read them like that, or put the CD case upside down...