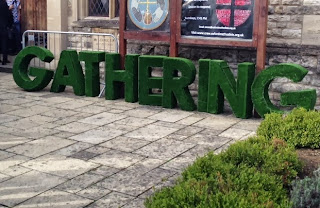 Our last multi venue music festival of 2013 brought us to Oxford, the City of Dreaming Spires. The occasion was Gathering 2013 which featured around 40 bands playing over 7 stages in 6 venues. Here’s our review, or rather……

1. Gathering is not a religious event.

Although you could easily be confused into thinking it was. With a queue that snaked its way down the pavement outside Cowley Road Methodist Church and large 3D letters spelling out GATHERING outside (see picture above), it wasn’t altogether surprising that we were twice asked what was going on by passing strangers. Was it a new religious cult one of them asked? No, it was just the eager queue for the wristband / ticket exchange of a music festival. The only religious experience to be had was the conversion of punters into fans.

There was a little bit of confusion amongst non-locals (including ourselves) having arrived at the venue marked on the programme as The Bullingdon to find that it had become the Art Bar. Thankfully the confusion lasted only a few seconds before we ventured inside to catch the creamy pop magic of Lucy Taylor aka Pawws, who together with a drummer and keyboard player coated the room with a sweet glossy musical shine, a touch of flute and lyrics that explored different parts of relationships.  “I can make you feel better,” she cooed on one song. She was right.

3. The early bird catches the worm.

And that worm for us was JJ Rosa. With moments of Prince-like funk, groovy disco, a smattering of Hendrix and a cover version of Last Night A DJ Saved My Life by Indeep, Jessica Rose Hancock (formerly of The Jessie Rose Trip) was a new wave pre-raphaelite red spandex clad rock queen with a show stopping soulful / jazz vocal. A feverishly good start to the afternoon.

Early bird tickets for this year’s Gathering Festival were just £15. Even if you just saw London Grammar and Local Natives (the two biggest bands on the bill) or like us venue jumped to catch plenty of rising talent this undoubtedly represents value.

With Gathering seemingly letting each venue charge whatever prices they wanted for drinks, early arrivals at the Bullingdon / Art Bar found it was happy hour. We were charged just £2.50 for a pint of Thatchers cider. Another bargain.

6. If you want to make it absolutely clear where a venue is, just chalk it on the pavement. 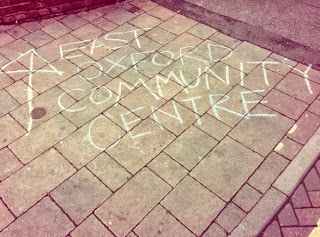 7. All venues should have a kitchen.

When you’re rushing between gigs fitting in as many bands as you can (we managed 11 in 9 hours) there’s no time to stop for a sit down meal. So, well done the East Oxford Community Centre for providing us with a delicious Burrito which we were able to eat whilst watching epic rockers Pylo.

8. All venues should have sufficient air conditioning.

Wolf Alice’s tense searing guitars and close to breaking point vocals (streaming below) injected plenty of heat into the aforementioned community centre, both musically and physically. It was no wonder that lead singer Ellie announced that it was the hottest she’d been in her life; but even despite the lack of air, the band played a scorcher with one of the best and most deodorant challenging sets of the day.The venue won on the Burritos but its ventilation scored low.

9. London Grammar was the band to see; but only if you hadn’t seen them before.

Or at least that’s the way most of Gathering’s punters seemed to think, with a large queue forming for their inevitably over capacity show at the Academy. Having already seen the trio numerous times this year Breaking More Waves took a different route back to the Community Centre and was rewarded by D/C whose blend of supple soulful vocals and crowning keyboard grooves spelt him out as a new musical royalty in waiting. Keep an ear and eye out for this talented new kid on the block.

10. Chlöe Howl often gets described as sassy. That’s because she is.

We’d give Chlöe 8/10 on the sassy scale for her performance at Gathering.

Check out some great photos from Gathering 2013 by friend and reader of Breaking More Waves Abi Dainton here and enjoy Blush by Wolf Alice below.