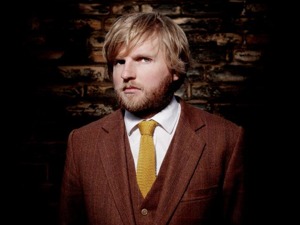 If there’s one word to describe the music of Tom Hickox, it’s gravitas. For here’s a singer whose stop-you-in-your-tracks baritone carries a powerful and earthy weight that is simply impossible to ignore. Yet it’s not just about the voice, it’s also about the songs. Take one listen to the solemn The Angel of the North (streaming below) and frankly if you aren’t left stunned into submission there is something horrendously wrong with the way you listen to music.

Born the son of renowned conductor and an orchestral timpanist mother, the  thirty-one year old singer’s tunes possess a poetical and theatrical sensibility to them that lends themselves to being played in grand music halls or candlelit churches. Take the bright lights beckoning ballad of The Pretty Pride of Russia (which has already been used to soundtrack a Doctor Martens advert) as a classic example. Here over piano and strings Hickox sings from a woman’s perspective of her dreams to journey to London. “He said he'll find me a job and a luxury flat with other girls like me and I'll have a salary more than in my dreams to buy jewellery and fur and clothes,” he coos before adding “there's more to life than this, the world must be explored and London is the perfect place for me to be adored.”

Then there’s the Let Be More Your Lover (which you can see a live version of here) a piece so warm and beautiful that it makes you question all the other music you’ve ever heard. Its a deep love song about the longest lasting and truest love - till the very end. If you’re a fan of Antony and the Johnsons this might be the song for you.

We’ve already seen his name tagged alongside the like of Tom Waits, Scott Walker, Nick Cave and Leonard Cohen and to those we’d like to add The Tindersticks and Neil Hannon of The Divine Comedy (when he’s not writing saucy, jokey and occasionally overly smug pop songs) as other reference points. But forget our words, forget the references and for the love of your ears just listen. The Angel of the North can be downloaded for free from Soundcloud below. Hickox’s album War Peace & Diplomacy is due this spring.

Tom Hickox - The Angel Of The North