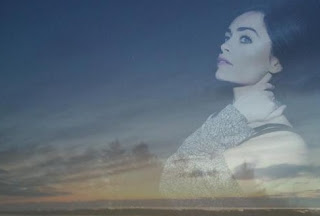 Today’s musical cocktail: Take a tender female vocal reminiscent of a more accessible Joanna Newsom or a more contained Ellie Goulding, with a little of the intonation of Alessi from Alessi’s Ark and mix with calming ambient dream-folk-pop acoustics and serve down on a remote beach in Ireland. The name of this cocktail? We’re calling it Slow Skies and it’s absolutely gorgeous.

We’re not quite sure if this Dublin group are a duo or a trio, their Facebook page currently claiming they consist of Karen Sheridan, Conal Herron and Patrick O’Laoghaire whilst various blogs and an email we received about the band suggesting that there are just two members. However no matter how many musicians form Slow Skies what isn’t in question is the beauty of their music.

You’ll find their sparse soft string kissed delicacy and absorbing melodies on their debut EP Silhouettes which was recorded in various sitting rooms in Dublin, Donegal and Wexford, and on forthcoming second EP Close which is released on May 4th. Even better it seems that like Breaking More Waves, Slow Skies find a commonality in finding themselves being drawn to the ocean, with one of the songs on Silhouettes being titled Across the Sea and the new EP featuring a song called On the Shore.

Whatever you’re doing today, no matter how busy you are, take ten minutes to swim in the music below. No words we can write can describe how perfect these songs are. So please, just listen.

Slow Skies - On The Shore


Slow Skies - Across The Sea (Video)