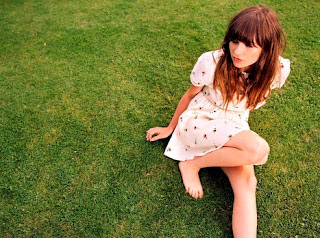 One pleasures of writing a music blog is to see some of the artists you’ve championed from an early stage go on to be popular with more than just a handful of hardcore in the know music fans.  After all, one of the purposes of this blog is to shout ‘hey we really like this artist, listen to them, we want you to like them to.’ So when others do and then invest in that artist to show that they enjoy them it to a certain extent vindicates what we do.


Gabrielle Aplin is a classic example of this, having now had two top 20 hits in the UK but having first been featured on Breaking More Waves back in the summer of 2011. Now there’s a new single Panic Cord. We say new but actually the original version was recorded nearly four years ago and found a home on her 2011 Never Fade EP. Gabrielle has re-recorded the track and is releasing it on May 5th.

The new version of the song is a little more rustic and loose sounding than the original, but keeps to the formula that finds her sitting comfortably close to the cordon marked ‘the new Amy Macdonald.’ A heartfelt acoustic romp, Panic Cord finds Aplin ruminating on memories of a past relationship that didn’t work and how maybe she was to blame. “We’re just a box of souvenirs,” she sings and if you’re of a certain sort of persuasion, like us, you’ll find yourself melting a little and wanting to give her a hug.

The video finds Aplin in amongst the romantic clichés such as roasting marshmallows on an open fire with her boyfriend, but the clues are there that everything isn’t quite right. He finds amusement on his phone in the pub when he should be staring into her eyes and enjoying time together. Boys, there’s a lesson there. When you’re out with your girl put the phone away and concentrate on what’s important, otherwise she might pull the panic cord.

That’s today’s relationship advice from Breaking More Waves over. Tomorrow we continue our shift to become a relationships advice blog and cover what to do when you find yourself falling in love with a friend. Maybe.

Gabrielle releases her debut album English Rain on May 13.