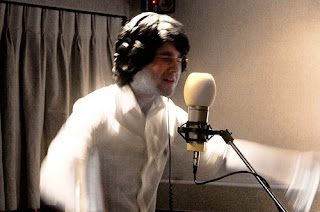 As the nights draw in Breaking More Waves huddles round the dwindling fire in the parlour, wondering if it is finally time to smash up the dining room table to create some more fuel to keep us warm in these dark, dark days. In the kitchen the cupboard is bare except for a lonely Pot Noodle, purchased in our affluent days as an ironic statement against Jamie Oliver’s Ministry of Food, which alas now looks delightfully edible. Yes, these are credit crunch times. And in such times a band with the name Skint and Demoralised should fit our mood perfectly.

Skint and Demoralised is front man and former performance poet Matt Abbott from Wakefield, and songwriter/producer Mini Dog from Sheffield. On the 17th November the duo release their debut single The Thrill Of Thirty Seconds, which is limited to 500 vinyl copies on indie label Another Music = Another Kitchen. The band however have a deal with a major label in the bag, and one has to wonder just how long it will be before the song is re-released for an attack on the charts.

The Thrill Of Thirty Seconds is a life affirming joyous pop song taken from their forthcoming long player Love And Other Catastrophes. The album was recorded in New York and will apparently feature Mike Skinner / Alex Turner type prose about lost / found love and let downs mixed with soulful, quirky pop tuneage with added instrumentation from session legends The Dap Kings, who were last heard playing on the last Amy Winehouse record. The single twitches with a spoken word verse, an irresistibly catchy chorus and loose jangling guitar that seem to have taken inspiration from The Housemartins, Johnny Marr and Jack Penate. It’s a song about the excitement and trembling anticipation of young love. “I‘ve never felt so scared, infatuated or excited, I felt just like a schoolboy and for some reason I liked it,” Matt sings and reminds us all of what those butterflies in your stomach can feel like. I suspect a few people will soon be having butterflies about Matt’s music. Here’s the video.

Email ThisBlogThis!Share to TwitterShare to FacebookShare to Pinterest
Labels: Skint and Demoralised

...but what was on that piece of paper?

We can only speculate...but I'm guessing a picture involving nudity judging by some peoples reaction....