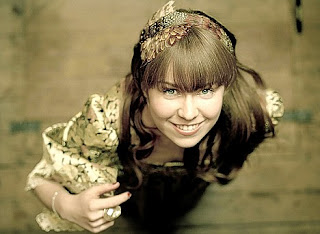 Alessi's Ark came to the attention of Breaking The Waves just a few weeks ago, and we haven’t been able to stop drooling at her wonderful voice since. Characterised by a lightness and beauty reminiscent of Bjork and Juanita Stein of the Howling Bells fused in some warped folkish spell, Alessi Laurent-Marke makes sounds that are delicately addictive.

On December 8th Alessi’s Ark release The Horse Ep through Virgin. Clocking in at less than 2 minutes, the song is concise, dreamy and picturesque, with no space for worn out instrumentals or an over used chorus.

Over the last couple of years there has been an uprising of talented young artists such as Laura Marling, Noah and the Whale, Emmy the Great and Mumford And Sons producing gentle often serene acoustic based folk music. These artists have made an unfashionable genre of music usually associated with bearded men over forty accessible and almost hip. In doing so they have found a whole new audience. With the release of The Horse which you can buy here, Alessi’s Ark may be about to embrace that audience as well with one of the sweetest of kisses. Her album Notes From The Treehouse, which features backing from American alt county folk champions Bright Eyes is due spring 2009. This is the official video to accompany the song. Watch it, it will be the best 2 minutes you’ve spent today.