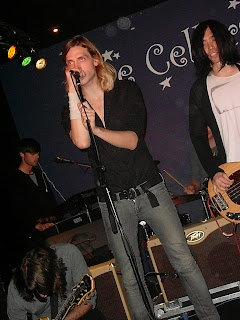 Bursting out over the UK’s radio airwaves for the last couple of weeks you may well have heard the sounds of Red Light Company and their new single Scheme Eugene. A heady mix of Arcade Fire, The Kissaway Trail and Polyphonic Spree with maybe a hint of Placebo, Scheme Eugene is a euphoric rock song formed with a big pop sensibility and traditional song writing values. Everything about Red Light Company screams big. Big guitars. Big drums. Big tunes. But right now they are not playing big venues, as its still very much early days for the group.

Fronted by the tall, thin, slightly androgynous, pointy shoe wearing lead singer Richard Frenneaux, the band seem to have taken big crescendo’s of guitar noise, dirty bass and lightened it up a little for more mainstream acceptability. Unfortunately, Frenneaux despite his lankiness and cheekbones is not the most engaging of front men, staring straight ahead all the time in a way that makes it impossible to tell if he’s just really nervous, intense or completely focussed. He utters virtually nothing between songs except a short word of thanks and when introducing the current single. The problem with this lack of showmanship is that although the bands music is powerful, one doesn't feel fully emotionally involved with band. It is left to his fellow guitarists to provide the visual energy on the cramped small stage, with plenty of hair shaking and aggressive power riffing.

There are moments of 80’s bombastic dark rock in the Red Light Company's sound, but these moments are outweighed by mainstream catchy melodies, particularly on the uplifting dynamic Scheme Eugene and Meccano where Frenneaux sings “For crying out loud the weekend is over. Push it out, there's smiles to uncover.” The words could not be more perfectly pitched on a rainy Sunday evening in Portsmouth.

The biggest problem for a band like Red Light Company is that The Cellars is not particularly suited to their style of music. Best for quieter acoustic acts with the tables and chairs near the low stage, long bar in the middle of the room, and wide columns, the space imposes on a band who probably fare better in a traditional dark sweaty rock club with a wide open dancefloor for their hook laden widescreen rock to blast into.

Maybe if things go their way they may get that chance of doing things on a bigger scale.
Posted by Breaking More Waves Blog at 23:47