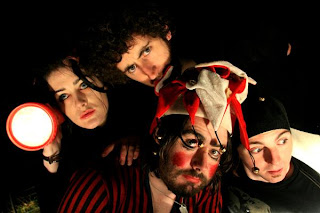 When I wrote in my previous blog that Fight Like Apes were “like a pumped up fist f*ck against the wall of a pub, under CCTV cameras with your mum and dad watching from the other side of the street,” the band messaged me on my Myspace to tell me that it was the best thing that anyone had ever written about them, and then linked the piece from their website.
Well, I can now repay the compliment by saying that Fight Like Apes have just released an album entitled Fight Like Apes And The Mystery Of The Golden Medallion which is one most inventive and funny aural assaults of the year. A bombardment of synths, guitars and strident yelping vocals, with a polished production by John Goodmanson it just manages to stay on the right side of accessible. The record is currently only on release in Ireland, but thanks to those good people at Recordstore you can get it now before its UK release next year.
Since the previous blog, it has been a busy few months for the band, with festivals, support slots with The Ting Tings, their own tour under the Levi’s One To Watch banner and forthcoming support slots with The Prodigy, where the band are bound to gain some new friends with their uncompromising, chaotic electronic punk sound.
The beauty of Fight Like Apes album is that although their music is sometimes abrasive they match it with a delicious sense of dark fun. Lead singer MayKay may shriek and spit “Shit, shit, shit, shit, bang, bang,” as the chorus to Do You Karate, but elsewhere you can find her singing about how she likes plain toast with no cheese to an electronic backing track that sounds like a Woolworth’s Christmas TV advert with thrashy guitars played by drunk ramapaging 6 year olds. The album may have song titles like Digifucker and Snore Bore Whore and one ’song’ Megameanie may follow Napalm Death’s lead and last a sum total of 5 seconds, but it is all done with a warped smile. After a sample from the ‘so bad its good’ horror flick Plan 9 from Outer Space tells of an attack on a town by aliens during Battlestations, MayKay screams angrily that “The sample sounds like shit and I don’t want to hear it again.” It’s this kind of depreciating humour that gets my vote.

Fight Like Apes are not a band you would make love to. They are not even a band you would have a drunken shag to. Fight Like Apes are a band that you would have a wild abandoned f*ck to. On a bed of nails. And afterwards you may be sore, but hell, you’d have a big smile on your face.
See you down the front for one of their gigs soon. Here's the video to Jake Summers which sums up the band perfectly, with its mix of humour, aggression and warped pop.
Posted by Breaking More Waves Blog at 09:04