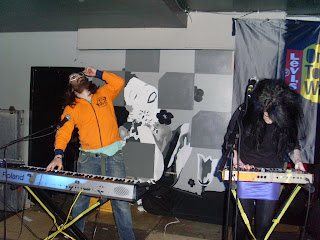 There’s a whole choice of gigs in Brighton tonight, from Ryan Adams, Peggy Sue, Chairlift to The Airborne Toxic Event. However Breaking More Waves decides on one of our current favourites, hardcore synth mentalists Fight Like Apes at Audio, the only gig venue we know of that has a fish tank in the toilets. Unfortunately it seems that either this global armageddon of a recession is kicking in, people have chosen other gigs or simply that Fight Like Apes are not proving popular, as there are only about forty people at the venue.
After encouraging people to come to the front, the lack of punters doesn’t stop the band producing the most brutal primal assault on the ears, combined with a deep dark sense of humour, the end result of which is a deliciously leftfield pop thrill. Musically this is a set from the Irish underground that is deliciously out there, aggressive, but still fun and with enough inventiveness to rupture a few spleens.
The band are an intriguing visual prospect, with gothic looking lead singer MayKay, comical but scary keyboard player Pockets with his flashing light goggle glasses, a big haired bass player who is not afraid to wear both a headband and sweatband, and a drummer who looks like he would be better off in a punk rock band. During their set the band will get the audience to waltz to I’m Beginning To Think You Prefer Beverly Hills 90210 To Me, MayKay and Pockets will jump off stage to bash plastic milk crates against the stage barrier for extra percussion, and during Jake Summers Maykay will wander through the crowd before falling to the floor to sing “Hey baby you were the bedroom king, Well I'm so sorry for breaking your ding-a-ling-a-ling.” Obviously not a woman to be messed with boys.
Fight Like Apes whole show is perversely wrong, and all the better for it. I suspect they would be great fun to go out with for a night, but they would end up chaining you to a lamp post, stripping you naked and ramming a hot poker up your backside. And as wrong as that is, it would seem like a lot of fun. This after all is a band who are happy to sing “Did you fuck her, and did you stick things up her?” whilst aggressive synths create a wall of electro noise; it seems both natural, funny and horrendously right for Fight Like Apes.
The band finish with Battlestations, MayKay screaming into the microphone and jumping up and down on the spot like someone with a mental illness whilst Pockets tips over his keyboard before leaving the stage. Looking round the venue it would be easy to expect to see bodies strewn across the floor, guts hanging out, ear drums exploded, with vomit strewn across their bodies. If there was such a sight then there is no doubt that the bodies would have had a smile on their face. Luckily Fight Like Apes sound didn’t quite reach that a level of brutality, but the smiles were there. There was no need for an encore.
Posted by Breaking More Waves Blog at 00:40