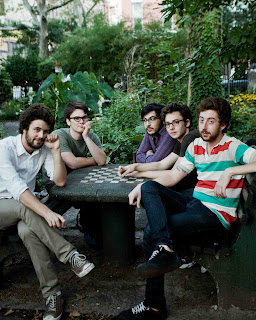 Passion Pit are the hottest but geekiest looking indie dance pop kids from Cambridge, Massachusetts, USA to come under the Breaking More Waves radar. Essentially the brain child of one Michael Angelakos they have so far released one single state side; The Chunk of Change EP. It conjures up memories of the mix tape mash up of The Avalanches, 8o’s electro synth and MGMT. Their sound is so now, so left field pop, so compact, that it may even be their undoing. A backlash may even start before they’ve had a good crack at it. Originally conceived as a late valentine present for his girlfriend, then distributed to friends and via Myspace, Michaels’ songs ended up being released by Frenchkiss, the people who put out Les Savy Fav, Cut Off Your Hands and The Hold Steady. From the minimalist electro pop of I’ve Got Your Number, to the multi coloured collage construction psychedelic pop of Better Things, Angelakos sings with a fey high pitch affected vocal that at first may annoy, but quickly becomes highly addictive. You can hear this best on Sleepyhead a song that features infectious swirling synths, helium backing vocals and a highly creative video (below) which goes back in time when pictures were fixed to a spinning device to create the illusion of movement. Watch and be confused and amazed.
Posted by Breaking More Waves Blog at 21:03

Don't disagree with it's 'now-ness' but somehow makes me think of early nineties ... maybe something from Ninja Tunes or DJ Shadow ... not really sure why though!

Yeah I can see that as well.