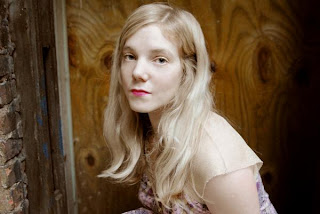 In 2007 Essie Jain released We Made This Ourselves, a sparse minimalist album of delicate chamber folk music built around a captivating almost choral sounding jazzy vocal. Breaking More Waves only discovered this wonderful album earlier this year, having stumbled upon Essie at the End of the Road Festival. Next week the English woman in New York releases her second long player, entitled The Inbetween.

Once again the album is full of low key, incredibly tender pieces such as the haunting Goodbye, which is almost ghostly and baroque in its sound. The album is however a development from the first, being more varied and somewhat fuller with additional instrumentation. For fans of the first album, this increase in scope and several upbeat tracks such as Here We Go and The Rights may jar a little, but it may also bring her new fans. Two versions of We Made This Ourselves would also be ultimately pointless. The Inbetween is ultimately less introspective in its sound, with a greater degree of experimentation with strings, drums, guitar and horns tastefully added to the mix. It is however most certainly not a party album, and is still best listened to late at night on your own, as much of it invokes an incredible stillness in the listener.

The album, which was released earlier this year in the USA is being released on the Leaf label in the UK and a European tour is being planned for next year.
Posted by Breaking More Waves Blog at 21:54