Florence And The Machine - Dog Days 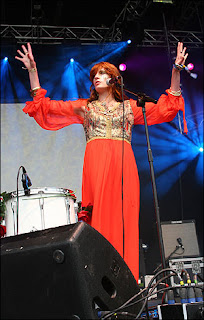 On the 1st December London’s Florence And The Machine release their second single Dog Days, on Moshi Moshi, although it is available to download now. Staring with a gentle mandolin refrain and delicate almost soulful voice, it soon develops into a triumph of handclaps and thumping Adam Ant style drumming with Florence’s distinctive Patti Smith bluesy styled vocals. This song has the potential to further pave her quirky way to stardom next year or at the very least serves as an appetiser for what could be a very fresh and exciting album. Backed with a harp touched cover of You’ve Got The Love, it is an essential purchase.

Having taken command of many festival audiences this summer, and a recent headlining tour where venues were decked out like a village fete with bunting, bird cages and floral posies, Florence has now signed to Virgin records. There is absolutely no doubt that she will be near the top of many “Sound of 2009” polls in the next month or so, including Breaking More Waves very own 10 to watch list.

Why Florence deserves to be a star is not is not just because of her vocal range that can produce floaty high pitched choral delights and gutsy sexy deeper tones, but also due to her complete natural madcap alt folk rock eccentricity. At Camp Bestival earlier this year Breaking More Waves witnessed Florence finish her set and then immediately go to the side of the stage to pose for photos, willingly throwing her arms around new found fans with genuine excitement and all this from a girl who sings“I took a knife and cut out her eye I took it home and watched it wither and die."

Be scared of Florence, but love her as well. Sometimes pagan, sometimes dreamy, sometimes like an overdose of adrenalin, sometimes just very unique Florence and the Machine deserve success and Dog Days propels her in the right direction. It remains to be seen if her excess of energy and crazy ways can find an appeal with the mainstream public, or if she will remain an engaging leftfield attraction. Here's the video to the single.

Email ThisBlogThis!Share to TwitterShare to FacebookShare to Pinterest
Labels: Florence and the Machine