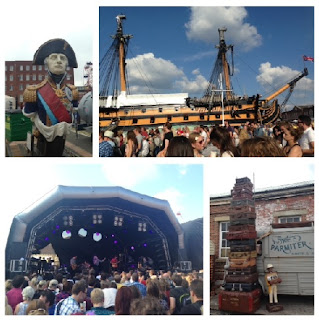 With festival ticket prices continually rising and becoming unaffordable for many, Portsmouth’s Victorious Festival provided a low budget alternative at only £15 a ticket per day for adults and £5 for children. Set against the backdrop of a historic dockyard which includes HMS Victory the site provided for an unique and unusual festival location. Breaking More Waves took to the cobbles, concrete and tarmac by the sea to experience the second day of the event.

Some Things We Learnt At Victorious Festival 2013 (Day 2 – Sunday)

1. One of the stars of the show was The Mary Rose.

Not a new up and coming indie band, but Henry VIII’s tudor flagship that sank just off the shores of Portsmouth on the 19 July 1545 and was raised from the seabed over 400 years later.

Not only did your value ticket allow you to watch music, enjoy boutique and vintage shopping stalls, a kids area and a real ale festival but it also gave access to the historic dockyards visitor attractions such as the HMS Victory, the HMS Warrior and the newly opened Mary Rose museum, which we spent a couple of hours in the morning exploring. The elliptical shaped building gave access to view the impressively preserved skeleton of the famous ships hull in a dark haunting atmosphere, that echoed the experience of being on board the ship itself. With three interlinked floor plates giving sight of not only the carcass of the Mary Rose but the incredible treasures that were painstakingly recovered from the sea bed the visit to the museum was worth the ticket price of the festival alone.

2. The music was rather good too.

Our musical highlights were all found on the second stage (The Little Johnny Russell’s stage), a large marquee like structure built on a tarmaced area that appeared to be normally used as a car park. With an excellent soundsystem Fenech-Soler's (streaming below) brand of synthy rave-pop found the audience being transformed from head nodders to fist punchers and hip wigglers with some choice cuts from their forthcoming second album Rituals and earlier singles such as the euphoric Stop and Stare.

Before that The Joy Formidable raged ears with their don’t-mess-with-us frazzled gut-punching guitars. Their set was a criminally short half hour and ended with guitars being thrown against a giant gong, but by that time our ears were ringing with their own buzz of excitedly intoxicated noise. In fact fuzzy guitars won the day more than once, with local band Is Bliss playing shoegazey melodies that sounded more textural and dreamy than ever before, the group benefiting from a quality PA system rather than the muddy pub venue speakers they’re used to playing.

3. Portsmouth likes a drink. But it seems that the organisers didn’t appear to fully realise it.

A bargain ticket price meant a lot of punters, yet in terms of the festival infrastructure the organisers appeared to show a lack of experience in terms of what would be required. With a no re-admittance policy, expectations were that there would be adequate food and drink stalls, but as the site became busy in the early evening it was clear that the concessions available were straining. The bars in particular were overloaded, far more than any other festival Breaking More Waves has attended this year, there simply not being enough bar length or people serving to cope with demand. Food stalls were also way busier than average and we heard reports that the day before many stalls ran out of food completely. Queues for toilets were no better or worse than any other average festival, however they could have been improved with more thought to the layout of the cubicles, provision of urinals by the main stage and better servicing. If Victorious Festival runs again in 2014 and the organisers can improve these issues and keep prices affordable then they really could be as victorious as the name suggests.

4. If we were Maximo Park’s school teachers we’d give them an A for effort but only a C+ for achievement.

In Paul Smith Maximo Park have an engaging, energetic  scissor kicking frontman, but musically the group have never really progressed much from beyond their original template of mid 2000’s indie-art-rock. They’re 100% competent, reasonably pleasing (particularly on The Coast Is Always Changing – a song that if ever there was one seemed designed to be played in Portsmouth) but they lack the true spark of invention or great song writing to make them anything other than a  just above average and workmanlike band.

5. Every festival should have a glass deposit scheme.

This year we’ve seen a number of festivals (Camp Bestival, Latitude and Flow) operate a recycle your glass deposit scheme on drinks. The results each time has been crushed plastic glasses and litter free sites. Unfortunately despite reasonably good provision of bins by the end of the night the Victorious Festival was strewn with litter. Hopefully if the event returns in 2014 this is something else organisers will consider.

On one hand, Church has to be applauded for doing something different and taking a risk. Yet on the other, there was a nagging feeling during her main stage set (which suffered from poor sound quality) that experimental just means lack of songs. Even a cover version of Ultra Nate’s Free left most of the audience a little bewildered and passive in their response and yearning for the likes of Crazy Chick to light up the day.

In conclusion: Victorious Festival 2013 was the Lidl of music festivals. Truly excellent value with some surprisingly good products, but be prepared to queue at the checkouts.

Fair review. We had a great time, but as has been acknowledged here and on Facebook the bar, food and loos just weren't up to scratch. Also re; drink we were badg searched on the way in and bottles of water removed from us but there was no available water points on site that we could find once the toilets in the cafe area closed in the evening.

A very polite way of saying that Charlotte Church was a bag of shite there.

me & my girlfriend attended the festival on the Saturday seamed very layed back to most festivals & have worked on a few .
We fond by mid afternoon it was getting very busy by about 5pm the main shop was closed with the restaurant in we quied for over an hr wich is norm for a music festival it was the fact that try get chips & sais sold out nowt on the boards say what was sold out as would had save time . we tryed 4 food outlets they also sold out of things i complaind to a member of staff of the festival they then said nowt do with them . when got home i put on twitter /facebook they bard me with no reply .
Think was a good price value for money with little knowledge of big events