Phantom Runners - It Takes Me Away (Video) 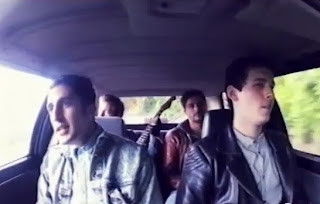 “It’s not every day that I feel I can profess to having discovered the future of indie pop music in true Alan McGee style, but I’m fairly sure this could be it.” They were the opening words of an email we received yesterday. Now that sounded pretty exciting. Until we realised that we’d actually featured the band (and song) in question back in May of this year. Remember? They are called Phantom Runners.
But let’s not get disheartened, because all of us new music lovers have those Alan McGee moments. Sometimes those moments end up becoming our equivalents of Oasis, My Bloody Valentine, The Jesus And Mary Chain or Primal Scream, whilst other times they end up being like The Loft or The Jasmine Minks. The important thing is that having those musical moments is a bit like sex; if you start worrying too much about what’s going to happen after the moment, (long term relationship or being dumped because you actually weren't good enough) you take all the joy out of the moment.
So just bloody enjoy it whilst it lasts.
We enjoyed it back in May and now we're having another bash, only this time, it's like pornography, as a video is involved. It features the band having a jolly old sing-a-long in a car and in a field, all shot in dodgy VHS style, which seems appropriate for the band’s sonic set, which would sit perfectly on one of the Shine compilations from the mid-90’s.