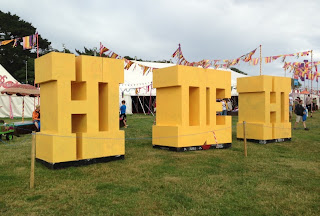 Now in its sixth year Camp Bestival occupies a unique position in the festival market as the only mid-sized music festival that aims fully at a family crowd. Whilst its bigger brother Bestival takes 50,000 adults and turns them into children through over consumption of intoxicating substances, Camp Bestival starts with half of its audience as the real little things. Camp Bestival is the only festival we know of where Mr Tumble on the main stage is the equivalent of The Rolling Stones at Glastonbury and where the must have fashion accessory is a pull along trolley pimped with fairy lights, comfy duvet and scenery to pull your little sleeping loves around in as night arrives.


As usual Breaking More Waves was there, albeit without the trolley - although the teenagers in our group confessed that they would have loved the idea of being pulled around like that. Lazy tykes. So here is our review of Camp Bestival 2013 or rather 10 Things We Leant At Camp Bestival. (Other more critical and deeply journalistic reviews are available elsewhere).

1. The term ‘headliners’ at a family friendly festival is meaningless.

With half the audience being children some of the biggest crowds at Camp Bestival were for acts that were appeared during the day rather than the traditional end of night main stage performance. Friday night saw Richard Hawley, the supposed main stage headliner play to one of the smallest crowds of the day, whilst other bands on in the afternoon secured bigger audiences and the likes of kids entertainers Dick and Dom and Mr Tumble pulled in huge numbers.

2. We learnt how to do a lot of things. The Literary Tent featured a series of talks called ‘How To…’ such as ‘How To Be A Baddie’, ‘How To Interview’, and ‘How To Open A Restaurant’. Maybe Ash should have been invited to give a talk on ‘How To Play A Festival’.

Because Ash’s set at Camp Bestival showed exactly how to do it. Don’t arse around with songs that nobody knows – this isn’t your audience. Simply play all the singles rolled out one after another, with no new material, and no album tracks. A cover of Teenage Kicks is acceptable though. Bang. Job done.

3. As a DJ, it doesn’t matter how many tracks by worthy d-i-y bedroom producers or hip remixes you’ve got rolled up your sleeves, when it comes to getting people pulling crazy dance shapes at a family festival in the Bollywood Tent on a Sunday afternoon, Smells Like Teen Spirit by Nirvana and Blame It On The Boogie by The Jackson Five do the business. So does the music from SpongeBob Squarepants.

We were part of that DJ collective that played those songs. They rocked. Especially SpongeBob. Hopefully more new music bloggers will catch on to this amazing artists soon.

4. If you’re too posh to poo at a music festival it’ll cost you £20 for the weekend.

If the idea of the 'normal' on site composting toilets or portaloos was just too much for you Camp Bestival replaced one block of these this year with fully flushing, cleaned after every use toilets. However it came at a price - £20 for an adult or £5 for a child under 12 for a weekend. That’s £50 to poo if you’re a posh family of four. A sh*t load of money.


If the last decade has brought us the iGeneration (self-obsessed, don’t give a f*ck, phone upgrade, look at me Instagram selfie obsessed, drop your litter wherever you like, detail every aspect of their life online in the misguided belief that we’re all actually interested in it) then maybe Camp Bestival is creating a new more socially aware bunch of kids. Maybe.


They were certainly an environmentally friendly bunch, scavenging for every dropped paper cup (and those in the bins) and returning them to the recycling bars. At first we thought that Camp Bestival kids were a very special breed with incredibly environmentally aware parents. Now we realise they were only in it for themselves, with every cup returned generating a 10p refund, but still at least Camp Bestival is teaching these kids the value of environmental awareness.

It was our fourth time in the presence of the band.  The third time (Blissfields) it just didn’t quite work, but in a dark and an enclosed space it did. Their sound filled the Camp Bestival Big Top like kisses in a lovers den, with a spine-tingling weightiness and restraint that was downbeat yet breathtaking. Hannah Reid’s pipes are the sort that as she opens them you’re left gasping. Streaming below is a new song from the band, released to the world wide web yesterday. Feelings wasn't performed at the festival, but will form the b-side of their new single Strong, which was.

7. We learnt some new swear words.

Flap crackers. Nanny nob nobs. Thanks Dick and Dom for your anarchic in between band fillers (and expansion of our vocabulary) on the main stage. There’s something hugely entertaining about thousands of people, standing in a field in front of a castle (adults and children) speedily singing made up swear words shown on a huge karaoke screen.

8. We learnt how to make a small child look like they’ve taken drugs.

Keep them up late for 3 nights. Wake them up early to go and see Mr Tumble. Dress them in a fairy costume or as a superhero. By Sunday they’ll have big druggy wide eyed stares. If they’re under 5 they’ll also be liable to a screaming tantrum at any point.

Congratulations to Radio 1 DJ Sara Cox who revealed in the Literary Tent to a packed like sardines audience that it took her 9 hours to travel to Camp Bestival, because she’d entered Ludlow Castle rather than Lulworth Castle in her Sat Nav.

This was our fourth outdoor camping summer festival this year. The weather was once again near perfect. Wellies? Pah, never heard of them.

It really is a Great British Summer and Camp Bestival was part of that.

London Grammar sounding very good indeed, nice review btw - there is no way I'd pay £20 to go for a number 2!

I've been hearing really good reviews of London Grammar gigs. I guess I'll have to check them out the next time they play somewhere close to me.

Enjoy the rest of your holiday!

'Wake them up early to go and see Mr Tumble..' exactly what kind of kids have you got there? Mine was up at least 5 hours in advance of him hitting the stage.

Tbh our kids were still fast asleep when Mr Tumble was on and would have disowned me as a parent if I'd woken them to go and see him!